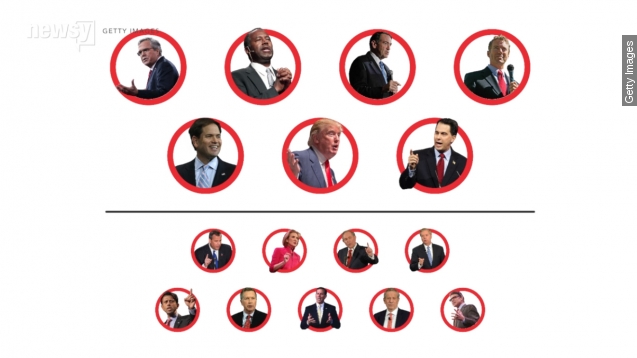 This is what it looks like to be on the margins of the first Republican 2016 debate.

"This debate comes six months before the selection of a single delegate," John Kasich said on Fox News.

"This is not a one-shot pony here. We've got a full campaign in front of us," Rick Perry said on Fox News.

Unlike in previous years, Fox News is using some controversial criteria for Thursday's debate.

Of the 17 candidates, the network is inviting only the 10 candidates with the highest averages in the five most recent national polls of the network's choosing. Those who don't make the cut will debate in a televised forum earlier Thursday evening.

A handful of candidates can breathe easy. They're pretty much assured spots on the main stage.

The rest aren't so lucky.

And truly, there is a bit of luck involved. Several candidates could easily be within the margin of error — depending which polls Fox uses.

That includes former Pennsylvania Sen. Rick Santorum, who points out he was polling in the single digits during his 2012 bid and yet went on to win the Iowa caucuses. (Video via C-SPAN, Santorum for President)

"I was at 2 percent in the national polls. National polls mean nothing. It's an arbitrary figure," Santorum said on ABC.

On Tuesday, Fox will announce which of the candidates make the prime-time cut.