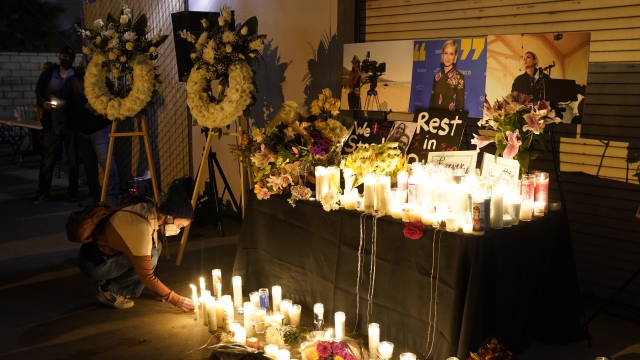 Candles in Albuquerque were lit in memory of Halyna Hutchins – the cinematographer who was killed in an on-set shooting last week involving Alec Baldwin.

"We gather to celebrate her legacy as a leader amongst young female cinematographers, as a wife and as a mother," said Liz Pecos, president of IATSE Local 480.

Her husband shared a message on Twitter saying Hutchins "inspired us all with her passion and vision, and her legacy is too meaningful to encapsulate in words."

Her friends are recalling more than a talented cinematographer.

"She has, I mean – tremendous talent is a given – but her human connection was incredible," Andriy Semenyuk said.

Hutchins' death and the injuries of the film's director are fueling calls for safer working conditions on film sets. The executive producer for ABC police drama "The Rookie" has already said the show will ban live weapons, which in industry parlance can refer even to guns loaded with blanks.

"I'm not on this film and I wasn't I wasn't there. I haven't even spoken to anyone who was there. But I know the places that I do work and generally we're so rushed that we have to we have to cut corners. We have to sometimes skip safety protocols. We have to do the best we can with what we've got and that leads to accidents," said Blossom Merz, set painter and IATSE Local 480 member.

The anger is palpable, even in the sobering 911 call released over the weekend where a caller said: "He's supposed to check the guns. He's responsible."

It's unclear who the caller is talking about, but an investigation is ongoing and there are no charges filed.

"Every person deserves to go to work with complete security knowing they can perform their work and return home safely," Pecos said.

A desperate plea for safer sets as a family learns how to live without a wife and mother.