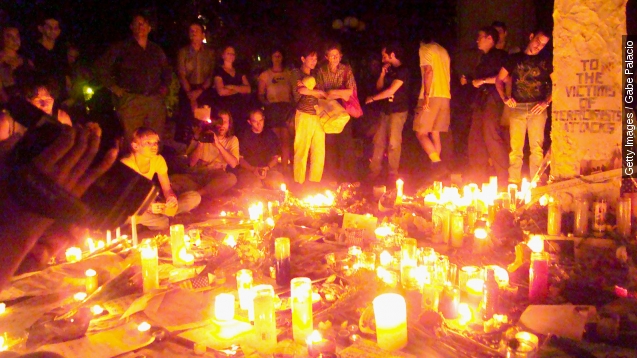 SMS
Love Stories Of 9/11 Show Resilience In The Face Of Grief
By Newsy Staff
By Newsy Staff
September 11, 2015
Many of those who lost loved ones in the Sept. 11, 2001 terror attacks put their sorrow toward something positive.
SHOW TRANSCRIPT

But for those who lost a spouse or significant other, many tried to turn their grief toward something positive.

Jennifer Gardner Trulson's husband, Doug Gardner, was killed in the attacks. She wrote down her memories of him so her two young children could remember their dad. (Video via AOL)

"After Doug died, my first panicked thought was, 'How am I going to give him to the kids? How are they going to know their father when they're old enough to ask?'" Gardner Trulson said.

But she soon realized the memories could come together in a book. "Where You Left Me" follows Gardner Trulson's journey from grief to being able to love again.

Some who lost loved ones became advocates for policy changes after the tragedy.

Beverly Eckert lost her husband, Sean Rooney, in the World Trade Center collapse. In a piece for StoryCorps, she remembered their last phone call.

"We stopped talking about escape routes, and then we just began talking about all of the happiness we shared during our lives together," Eckert said.

She went on to be a spokesperson for victims' families, lobbying for changes, including transparency in the investigations following the attacks and improvements to building codes.

Although many lost loved ones, at least one connection was formed because of 9/11.

On the day of the attacks, flights were barred from entering the United States, and many were sent to Gander, Newfoundland. There, two passengers met and fell in love.

"Meanwhile, you two are just walking around flirting," said actress Sharon Wheatley, who played Diane in a musical about the Marsons' story.

Nick and Diane Marson were married almost exactly a year later and even returned to Gander for the 10-year anniversary of 9/11 in 2011.