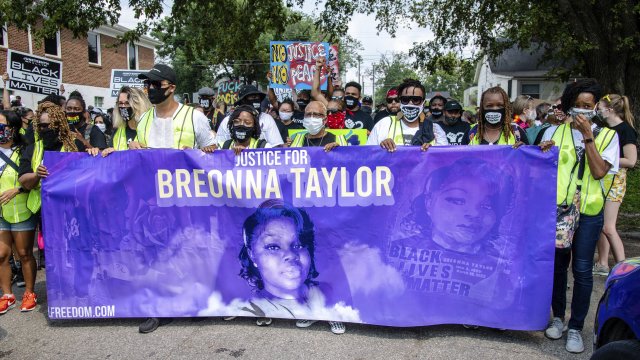 SMS
Louisville Police Prepare For Breonna Taylor Decision
By Newsy Staff
By Newsy Staff
September 22, 2020
The announcement from the Kentucky attorney general could happen as soon as this week.
SHOW TRANSCRIPT

Louisville police officers are preparing for the highly anticipated announcement about whether officers involved in Breonna Taylor's shooting death will face charges.

The announcement from the Kentucky attorney general could happen as soon as this week.

The Louisville Police Department Chief of Police declared a state of emergency for the department.

The department said it has canceled vacations for employees to ensure appropriate staffing. The federal courthouse and other federal buildings have been closed for the week and barriers have been set up downtown. Many of the protests over the last several months have been near there.

Meanwhile, six officers are under a separate internal investigation for their roles in Taylor's shooting and whether they broke any department policies.