Thousands Are Displaced By Flooding As Rain Keeps Pouring In Louisiana 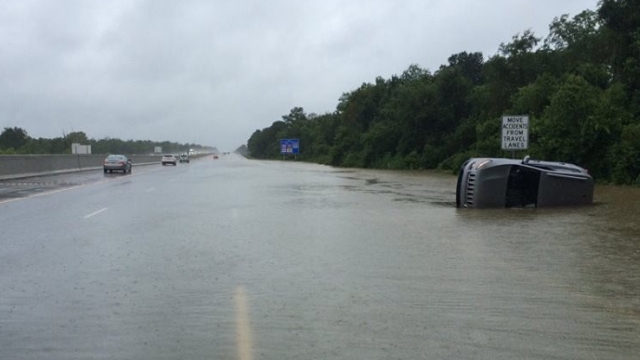 SMS
Thousands Are Displaced By Flooding As Rain Keeps Pouring In Louisiana
By Grant Suneson
By Grant Suneson
August 14, 2016
Louisiana Gov. John Bel Edwards declared a state of emergency, and more than 7,000 residents have been forced to evacuate.
SHOW TRANSCRIPT

Louisiana is calling on the federal government to help deal with the fallout from the unprecedented floods that hit the state over the past week.

Gov. John Bel Edwards declared a state of emergency over all of Louisiana and requested the help of the Federal Emergency Management Agency to deal with the extreme weather.

SEE MORE: At Least 2 Dead In Louisiana And Mississippi Floods

Since Wednesday, the state has been inundated by record-breaking rainfall. More than two feet of rain has fallen near Baton Rouge.

More than 7,000 people have been rescued from high waters, and roughly 5,000 were forced to stay in shelters after being displaced. Some drivers were even stranded on highways overnight.

The flooding is thought to be responsible for at least four deaths. Unfortunately, there's no end in sight. Two to four inches of rain is expected to fall on some already drenched areas on Sunday.

Gov. Edwards urged people to heed evacuation notices and to stay off roads if possible.