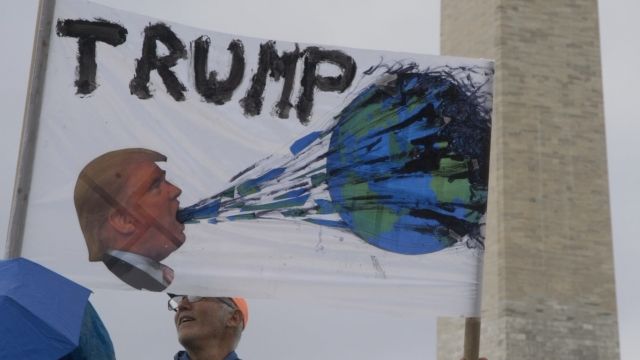 Despite claims that the March for Science was nonpartisan, there was a lot of anger directed at President Trump.

Thousands of people gathered and marched in cities around the world Saturday — all in the name of science.

More than 600 marches took place globally as part of the March for Science. Even the North Pole hosted its own science march.

But at the main event in Washington, D.C., despite attempts to portray the march as nonpartisan, there was a lot of negativity toward you-know-who. President Trump's move to muzzle scientific organizations is part of what prompted the march in the first place. His proposed budget cuts for things like the National Institutes of Health and the Environmental Protection Agency gave the March for Science an even greater sense of urgency.

What Motivates People To March For Science?

Protesters at the March for Science spoke about climate change, the EPA and inspiring others.

And while the marchers seemed generally pleased with the turnout, they didn't seem optimistic about changing Trump's stance on science.

"Our nation has benefited so much by the enterprise of science, it's disturbing that we might turn back on that," said Dennis Robbins, a professor of science education at Hunter College.

Organizers called for a week of science engagement to keep the conversation going, which will culminate in the People's Climate March on April 29.