Lost Brain Cells To Blame For Sleep Problems Among Seniors 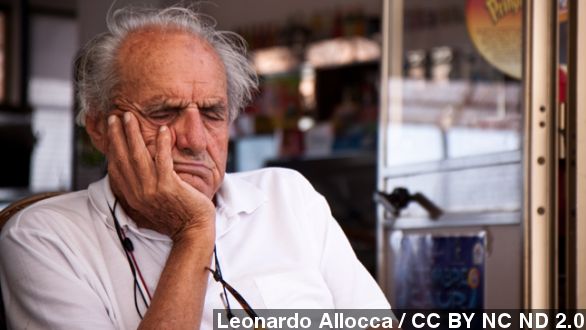 By Briana Koeneman
August 21, 2014
According to a new study, elderly people might have trouble sleeping because of the loss of a certain group of neurons in the brain.
SHOW TRANSCRIPT

Researchers have known, as people get older, they have more difficulty falling and staying asleep. And now we might know why.

A new study from the Beth Israel Deaconess Medical Center and the University of Toronto says the loss of brain cells that act as a so-called "sleep switch" may be one of the reasons why many seniors have trouble catching some zzz's.

To come to this conclusion, researchers analyzed data from the Rush Memory and Aging Project, which includes nearly 1,000 people who joined the project at age 65 and will be studied until their death.

They found elderly people and Alzheimer's patients show a significant decline in a specific group of neurons called the ventrolateral preoptic nucleus, which is responsible for regulating sleep patterns in the brain.

The study's senior author told WBUR's Common Health, "This is the first time that anyone has ever been able to show in humans that there is a distinct group of nerve cells in the brain that's critical for allowing you to sleep."

The researchers noted by the time people hit their 70s, they're sleeping, on average, an hour and a half less than they used to when they were in their 20s.

And that lack of sleep can lead to a number of other health problems, as HealthDay points out, including thinking and memory issues, increased blood pressure and a tendency to develop Type 2 diabetes.

Disrupted sleep can even lead to issues that may end in institutionalization for Alzheimer's patients, like nighttime wandering.

According to the National Sleep Foundation, wandering and incontinence are the top two causes of institutionalization in Alzheimer's patients.

But one of the study's authors told The Huffington Post they hope this new finding could help scientists develop a drug that would help smooth disruptive sleep patterns by pinpointing the specific group of neurons without negatively affecting other functions like other sleep medications do.

The researchers say it's unclear when a drug like this would be available for use. The study was published in the journal Brain Aug. 20.