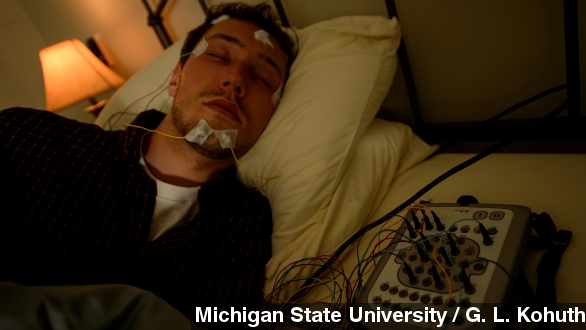 By Matt Picht
July 27, 2014
A new study shows sleep deprivation can make it harder for people to remember specific details of an event.
SHOW TRANSCRIPT

Sleep deprivation isn't good for any part of your body, but a new study says it can take a really devastating toll on your memory – finding loss of sleep can leave people with false or inaccurate memories.

To get the results researchers at Michigan State University and the University of California, Irvine attempted to suggest fake memories to sleep deprived subjects, in order to see how accurate their recollection was. (Via Getty Images, Psy3330 W10 / CC BY SA 3.0)

The experiment's 104 participants were asked to look at photos of a crime — half saw them on the night before the experiment, half on the next morning. Half of each group got a good night's sleep, while the other half was kept wide awake; then, each subject read a story about the pictures laced with misinformation, and was quizzed on what they remembered from the photos.

Researchers found the participants who were sleep deprived throughout the whole experiment — seeing the photos and hearing the false narrative — were the most likely to misremember details or recall false information.

The study concludes lack of sleep prevented some participants from properly committing the photos to memory. "Sleep deprivation may have impaired encoding of the original event, thus making memory more vulnerable to intrusions from misleading postevent information." (Via Psychological Science)

While the study mostly looked at how total sleep deprivation harms memory, co-author Kimberly Fenn notes any loss of sleep can affect how well you remember things.

"People who repeatedly get low amounts of sleep every night could be more prone in the long run to develop these forms of memory distortion. It's not just a full night of sleep deprivation that puts them at risk." (Via Michigan State University)

Previous sleep deprivation studies have shown that not getting enough sleep can affect both your long-term and short-term memory, hunger levels, and can result in a loss of brain cells. (Via Palo Alto Medical Foundation | Nature Communications | BBC)

The Centers for Disease Control and Prevention recommends adults get seven to eight hours of sleep a day, while teens and younger children need nine or more.

The subject still needs further investigation, but researchers say this study could impact the reliability of the eyewitness accounts used to solve crimes. But try not to lose any sleep over that.