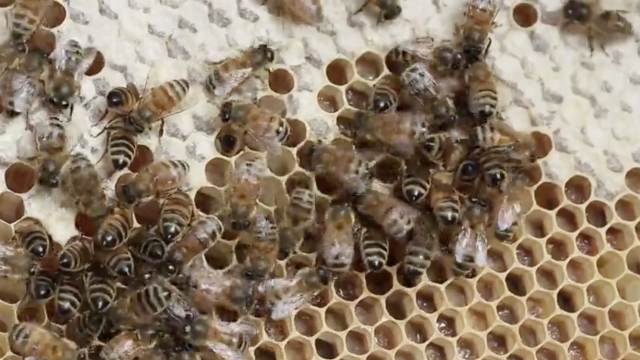 SMS
Losing Bees Could Have Huge Implications For The Environment
By Newsy Staff
By Newsy Staff
May 26, 2022
The decline or loss of bees could affect our food and other products, but it can also affect our environment, as they serve as a pollinator.

Worldwide, bees are vanishing, which could have huge implications for the environment.

Bees play an essential role in ecosystems humans rely on. They can produce honey and other products needed for food and health care products, but arguably their biggest role is as a pollinator.

Bees use pollen as protein to feed to their young: 13 bees travel from flower to flower trying to collect as much pollen as possible. It will leave a bit of pollen as it goes along, and by doing so, it helps the plants reproduce.

Pollinators like bees play a huge role in producing crops needed for our food. Their colleagues, like birds and bats, also help produce about one-third of the world’s food crop.

"If that process doesn't take place, what happens is that the plants cannot reproduce," López-Uribe said. "As we know, plants are the basis of all the energetic change in ecosystems. Bee-pollinated crops are the ones that actually gives us the most vitamins and minerals and nutrients, so... they are very important for a balanced diet."

The U.N. says bees are declining in population around the globe, and there's been evidence of it in the U.S., too.

While there are about 4,000 different bee species native to the U.S., more bee species in the states are becoming endangered.

The U.S. Fish and Wildlife Service declared a bee species endangered for the first time in 2017 and has since added more.

Beekeepers have lost roughly 40% of their managed honey bee colonies in each of the last four years, according to survey data from the nonprofit Bee Informed Partnership.

But there’s a difference between honey bees, who live in large colonies and are basically used as livestock, and wild bees, who tend to live on their own.

"One of the main differences is that honey bees are the only species in North America that has those large colonies, and so 90% of all bees are solitary. There is only one female that is present in each of the nests of the bees. A lot of the pollination is actually done by wild bees, and this is something that has become more apparent in the past few decades. And then I think that the most worrisome picture of bee decline is it is coming from these wild bees."

Both types of bees are declining for the same reasons, and climate change is one of them. Research points to higher temperatures killing bees off or causing them to relocate.

But relocation can be tough for bees — the housing market is tough for them, too.

Both farming and urban-suburban development give bees fewer places to find pollen or places to build hives.

Rather, they’re exposed to pollution and pesticides.

"There is not enough forage for honeybees, so even though, you know, we have the same number of colonies, then that transformation of how we use land has changed and impacted bees significantly," López-Uribe said. "We are using a lot of acreage to grow things like corn and soybean that honeybees can use, but they are not nutritionally very good sources of pollen and nectar for the east. So they are basically malnourished."

The good news is some humans are stepping up to help fix the problem. Individuals and local groups are trying to save the bees in their communities, doing everything from planting more bee-friendly plants to limiting the use of pesticides and exterminations.