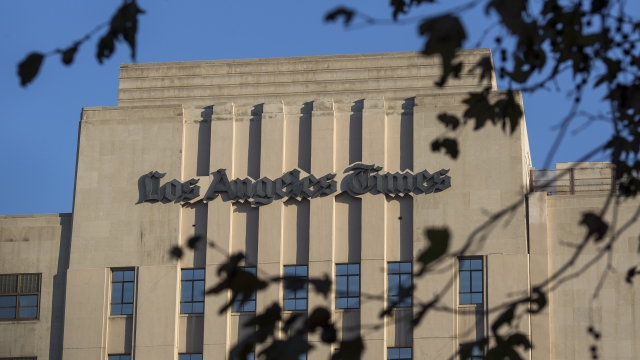 SMS
Los Angeles Times Offers Buyout Deals To Some Employees
By Caitlin Baldwin
By Caitlin Baldwin
February 21, 2020
The newspaper offered buyout packages for any employees who have been with the company for at least two years.
SHOW TRANSCRIPT

The Los Angeles Times is reportedly making some big moves to stay in business.

CNN reports the newspaper offered buyout packages for any employees who have been with the company for at least two years.

In a letter obtained by CNN, the California Times, the company that owns the Los Angeles Times, told its employees: "We know that to build a sustainable business and ensure our ability to provide vital journalism for decades to come, we need to move swiftly to make our product more digital, more nimble, and more attractive to loyal and new audiences. Buyouts will help us accelerate this process."

The Los Angeles Times was already struggling to stay afloat when billionaire Dr. Patrick Soon-Shiong purchased it in the summer of 2018. It was the first time the outlet had been under local ownership in nearly two decades. Since then, the California Times says it's invested over $100 million in its staff, technology and infrastructure.

The company says it told employees it doesn't expect any layoffs. A spokesperson told CNN, "The buyout offer is intended to give us a little more flexibility to create and hire new roles, and to give some staffers who are looking to make a change an opportunity to leave on their own terms."