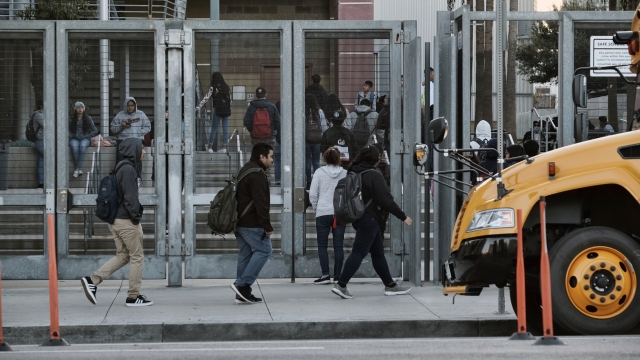 As it began its fall school semester online Monday, Los Angeles public schools also launched a massive testing and contact tracing program in hopes of getting teachers and students back in the classroom.

The L.A. Unified School District has partnered with UCLA, Stanford, Johns Hopkins, Microsoft and health care companies for the initiative. L.A. Unified has around 75,000 staff members and 500,000 students.

Schools Superintendent Austin Beutner said the program won't just benefit kids, but will also help the entire Los Angeles area. He added, "It will also provide significant education benefits for students as it will get them back to school sooner and safer and keep them there."

Los Angeles is one of the largest school districts in the country and the only major school district to lay out a plan for testing and contact tracing measures for the upcoming school year. Beutner said the logistics of the program haven't been worked out yet, but testing will first be administered to employees and their children in schools.

The program is expected to cost about $300 per student, or close to $150 million district-wide. Los Angeles has seen more than 220,000 confirmed cases of the virus.

In an op-ed in the Los Angeles Times, the superintendent wrote, "An effort like this is not simple and the scale is daunting. But if it works, it can be a model for other school districts and communities across the country."