Los Angeles Residents Say They're Getting Used To Wildfire Evacuations 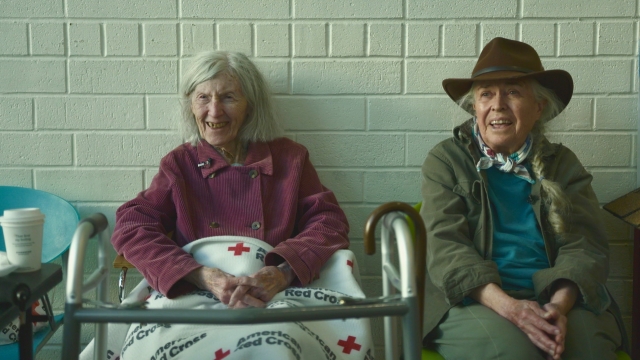 SMS
Los Angeles Residents Say They're Getting Used To Wildfire Evacuations
By Katherine Biek
By Katherine Biek
November 1, 2019
Newsy got an inside look at a 24-hour emergency shelter set up in Los Angeles by the American Red Cross for Getty Fire evacuees.
SHOW TRANSCRIPT

It might not look like much from the outside. But this recreation center became home to multiple Los Angeles residents who were forced to evacuate their homes because of the Getty Fire.

"Two calls at 3 a.m. from the fire department: 'Prepare to evacuate.' ... Another call came in was from the police: 'Evacuate now.' Well, OK."

Betsey Landis and Nola Hyland have both lived in California for decades.

"We're kind of used to these situations. So it wasn't a complete shock. If this had been the first time, things would have really seemed, like, impossible. But we had two practice fire drills."

So when they woke up early Monday morning to the evacuation alert, they knew they had to listen.

"If you don't want to go in, they're going to see you go anyway. And it's best to be in the safe place."

Since people were given little to no time to pack their essentials, the Red Cross made sure its emergency shelters were stocked with necessities Landis and Hyland might need.

"Kleenex ... shampoo ... toothbrush, toothpaste ... Everything that you might need to feel a little bit more comfortable during your stay."

Spokeswoman Marilyn Jimenez Davila gave Newsy an inside look at one of the 24-hour emergency shelters the Red Cross set up in Los Angeles.

"We have cots and blankets available for people. Also warm showers. We have meals here. And so many different partners of ours have been very generous and donated food."

There's even a spot for shelter guests to charge their phones and to watch the news for updates on the Getty Fire. Neither Landis nor Hyland's homes were damaged by the flames.

But others weren't so lucky. Some homes in this Brentwood neighborhood are practically burned to the ground. They're missing roofs, walls and windows. In some cases, you can tell the occupants were gearing up to celebrate Halloween before they were abruptly ordered to evacuate.

But back at the Red Cross shelter, Landis and Hyland's high spirits are contagious.

"They have to keep an optimistic attitude. ... Lots of times you have to leave your home and you hope it'll be there when you return to normal. And so far, I've been very lucky. And I'm very grateful to the city, and I think they've done a wonderful job."