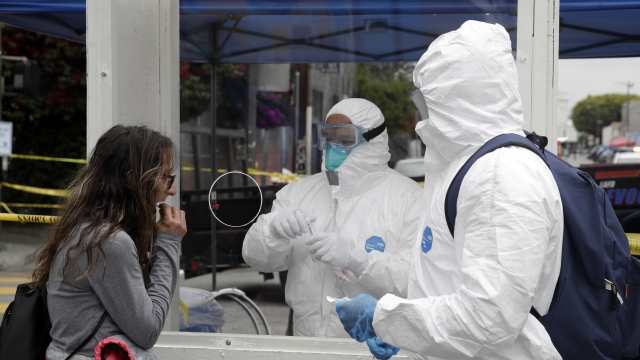 On Wednesday, Mayor Eric Garcetti announced L.A. will become the first major U.S. city to provide coronavirus testing to all county residents free of charge. In most cases, test results will be made available in 24-48 hours, and Garcetti said there will be no limit to the number of tests residents can receive.

Los Angeles city officials said the number of tests available has consistently been greater than the number of requests, and increased testing will provide critical data that could help inform decisions on stay-at-home guidelines. Testing was previously limited to essential workers, care providers and those with symptoms.

Los Angeles County already has more than 30 testing sites, and Garcetti said the city is capable of testing 18,000 people a day. Anyone interested in getting tested can schedule an appointment online, although front-line workers will still be prioritized.

Earlier this week, the White House released its "blueprint" for expanded testing, which puts the onus on states to develop their own testing programs and lists the federal government as the "supplier of last resort." Wednesday's announcement came amid reports from health officials that Los Angeles recorded its largest single-day increase in new coronavirus cases since the pandemic began.