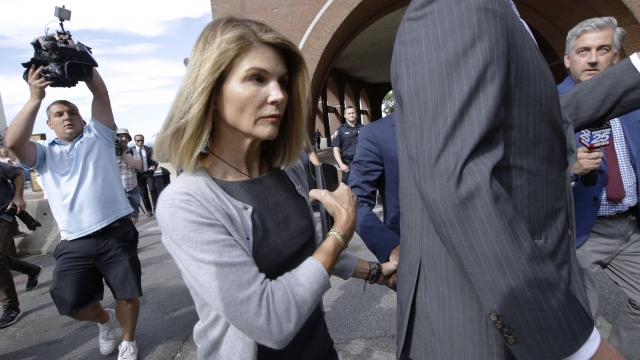 SMS
Lori Loughlin Receives Two Months In Prison For Admissions Scandal
By Bailey Vogt
By Bailey Vogt
August 22, 2020
The actress was sentenced today along with her husband, Mossimo Giannulli, who received a five-month term.
SHOW TRANSCRIPT

Actress Lori Loughlin will serve two months in prison for her role in the college admissions scandal.

The actress was sentenced Friday along with her husband Mossimo Giannulli who received a five-month term.

They spoke out Friday for the first time since their arrest. Both apologized for paying half a million dollars in bribes to get their daughters into the University of Southern California.

Loughlin told a judge her actions "helped exacerbate existing inequalities in society" and that she knows she made an "awful decision".

Loughlin and Giannulli maintained their innocence for over a year. They claimed they made "legitimate donations" to their daughters' schools and accused federal prosecutors involved in the Varsity Blues investigation of omitting crucial evidence. However, when a judge rejected those arguments, they changed their pleas to guilty.

Loughlin, best known for playing Aunt Becky in the sitcom "Full House," will have to pay a $250,000 fine, complete 250 hours of community service and undergo two additional years of supervised release. She and her husband must surrender to prison by November 19.