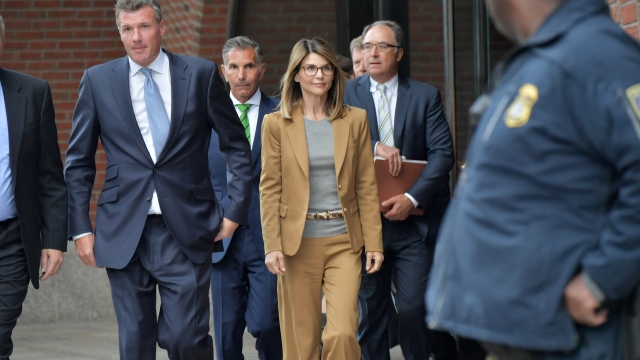 Prosecutors allege Lori Loughlin and her husband paid $500,000 to get their daughters fraudulently accepted to the University of Southern California.

Actress Lori Loughlin and her husband, Mossimo Giannulli, have pleaded not guilty to the additional bribery charges filed against them in the college admissions scandal.

The couple say they plan to plead not guilty to charges of conspiracy to commit federal program bribery, according to court documents filed Friday.

Federal prosecutors announced the additional charges against Loughlin, her husband and 10 other parents last month. The charge carries a maximum sentence of five years in prison and a fine of up to $250,000.

Earlier this year, the couple pleaded not guilty to charges of money laundering and conspiracy to commit mail fraud. Prosecutors allege Loughlin and her husband paid $500,000 to fraudulently get their daughters accepted to the University of Southern California as crew team recruits, even though the girls didn't participate in the sport. Loughlin and Giannulli are set to face trial sometime next year.

More than 50 people have been charged in what the DOJ called the largest college admissions scam ever prosecuted. The scheme was based on getting students accepted to elite universities with fake athletic credentials or by cheating on entrance exams. Prosecutors say William "Rick" Singer, a college admissions consultant, masterminded the scheme.

Another celebrity involved in the scandal, actress Felicity Huffman, was sentenced to 14 days behind bars in September after pleading guilty to mail fraud and honest services fraud charges. She was released from prison last week after serving 11 days.