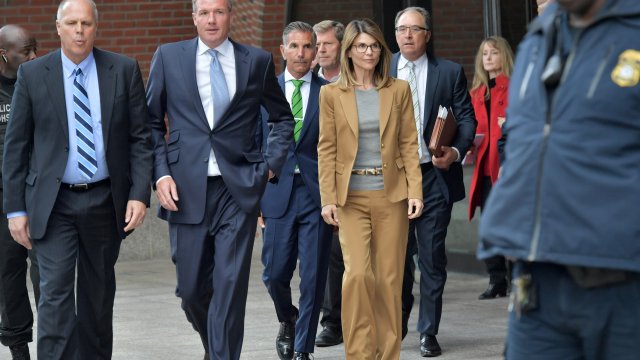 Loughlin and her husband are facing charges including bribery and mail fraud in connection with the college admissions scandal.

Actress Lori Loughlin and her husband, fashion designer Mossimo Giannulli, filed a claim on Friday accusing federal prosecutors of holding back crucial evidence in their case in the college admissions scandal.

The couple's lawyer filed the claim in U.S. District Court in Boston. It says the "court's intervention is urgently needed" and that the government is hiding information needed to ensure the couple has a fair trial.

Loughlin and Giannulli have pleaded not guilty to charges including mail fraud and bribery. They're accused of paying $500,000 to secure spots for their two daughters at the University of Southern California.

The claim says the "defendants believed all of the payments they made would go to USC itself — for legitimate, university-approved purposes." It also says investigators' notes describe USC's knowledge of the scandal and argues that withheld evidence could prove the couple's innocence.

William "Rick" Singer, the college prep executive behind the bribery scandal, pleaded guilty in March to racketeering, money laundering and other charges. He reportedly said he's helped "the wealthiest families in the U.S." get 761 children accepted at elite schools.

More than 50 people have been charged in connection with the college admissions scandal, and 13 parents have already been sentenced.