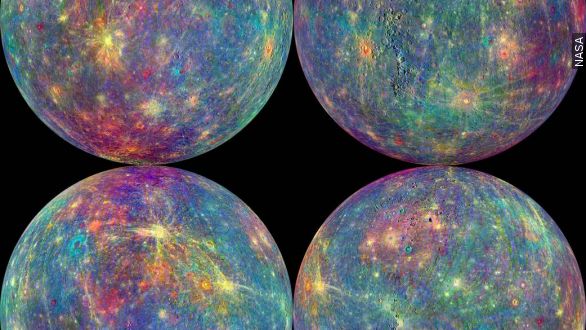 Looking good, Mercury. NASA has produced these stunning images of one of Earth's closest planetary neighbors thanks to MESSENGER, or MErcury Surface, Space ENvironment, GEochemistry and Ranging.

The space probe — the first ever to orbit the planet Mercury — has collected over 250,000 images since it started orbiting in March 2011.

Here's why Mercury looks like it's been tie-dyed. On board the MESSENGER probe is a system that captures spectral data. That data was overlaid onto monochrome images showing the planet's terrain. NASA visualized the wavelengths of light by converting them into colors.

All this just before MESSENGER crash lands. The space probe is almost out of the helium fuel it uses to hold its line against the gravity of Mercury and the sun. NASA says MESSENGER's demise will be just a matter of time.

And speed. MESSENGER will be doing 8,750 mph when it spirals into Mercury's surface. The impact is expected to be on the far side of the planet, hidden from the view of Earth.

And yes, Mercury's minimal atmosphere means MESSENGER actually will hit the surface instead of burning up.

"Rest in pieces" seems a suitable epitaph, considering the spacecraft will be ramming the planet at Mach 12.