When Baseball Teams Need Luck, They Turn To Rally Animals 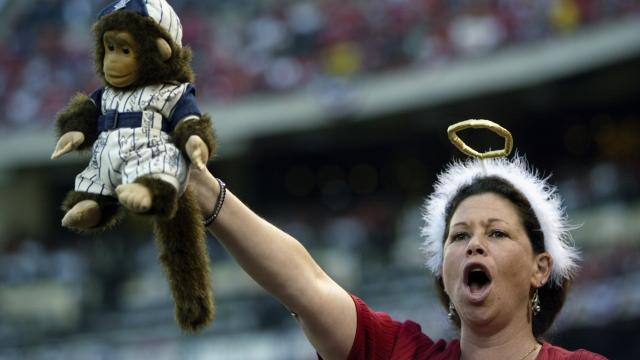 A squirrel? A monkey? A praying mantis? Baseball teams will do anything to get the mojo on their side.

Seeing an animal at a ballpark might feel like a nuisance. But for some baseball teams, it just might be the key to their next win — if you believe in the superstition.

See, baseball players are notoriously superstitious — always trying to get certain cosmic powers on their side. And when a plain old rally cap doesn't cut it, they'll turn to other avenues.

Like the Kansas City Royals. They found a praying mantis in the trash during a game and let it hang out in the dugout. They won five of their next six games, even taking the mantis on a road trip.

SEE MORE: Alex Rodriguez Is Making $16,000 Per Pitch This Season

And it's not like the Royals are alone here. In 2011, their in-state rival Cardinals saw a squirrel run across the field in the NLDS, and the team went on to win a dramatic World Series title.

But nonhuman markers of good luck probably look up to the Angels' Rally Monkey.

The Rally Monkey first showed up in 2000 when a couple of Angels scoreboard operators thought it'd be funny to put a clip from "Ace Ventura" on the Jumbotron and realized the fans loved it.

By 2002, the Rally Monkey was a national celebrity, and his scoreboard pump-ups led the Angels to a come-from-behind World Series win.

So, if you're on a struggling baseball team in need of a lift, maybe let a wild animal onto the field when no one's looking. It just might help you make the playoffs.