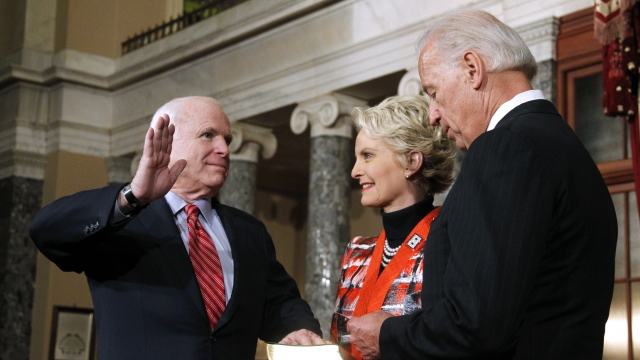 Gord Acra and Larry Kunh spent Monday morning strumming their banjos on the green of courthouse square in Prescott, Arizona, a Republican stronghold that voted for President Trump by over 30 points back in 2016.

The cities of Arizona may feel like oases under the hot desert sun, but nearly 2,000 miles from Washington, D.C., Arizonians have strong opinions on national politics.

When asked about politics in Washington, Kuhn, of Dewey, Arizona, laughed, “You can't answer [that] in a 30-second soundbite.”

In Yavapai County, support for President Trump, who visited this week, remains high.

But since 2016, the president’s rhetoric has polarized establishment conservatives in reliably red Arizona.

“I am a Republican, I will always be a Republican,” Cindy McCain, the widow of the late U.S. Sen. John McCain, told Newsy. “This isn’t about changing my party or anything like that; I just want better leadership.”

“They did not agree on very much,” McCain said with a smile. “But they worked across the aisle. They fought like cats and dogs, but in the end, it was not for personal gain, it was for America."

The couple are both retired CIA officers who moved to Arizona after hearing a profile of Prescott on NPR two decades ago while stuck in D.C. traffic.

“Blue all the way down,” added Joan Petty.

“People have always looked to us for leadership around the world and now they’re saying, ‘So, what's really going on there?’” she added.

“I've been a conservative Republican my entire life,” retired U.S. Sen. Jeff Flake told Newsy. “That's not changing, but I think the best thing for the conservative cause and for the Republican cause is to elect a Democrat in November,” he added.

Flake was a frequent critic of President Trump during his term as Arizona's junior U.S. senator before he retired in 2018.

He told Newsy he’s reached out to his former Republican colleagues in the Senate and encouraged them to vote for Biden, even if it's just this once.

“A lot of people that I know don't expect to support another Democrat in the future, they want to go back to supporting Republicans,” Flake said. “But man, we have to have a Republican that we can support — and one that seeks to build the party, not just drill down on a diminishing base.”

If a blue wave crests in Arizona, it won’t be due to demographic change alone.

“We were the inclusive party, we were the party of thinkers and idealists and people that would lead,” said McCain. “Unfortunately, I think we’ve lost our way.”