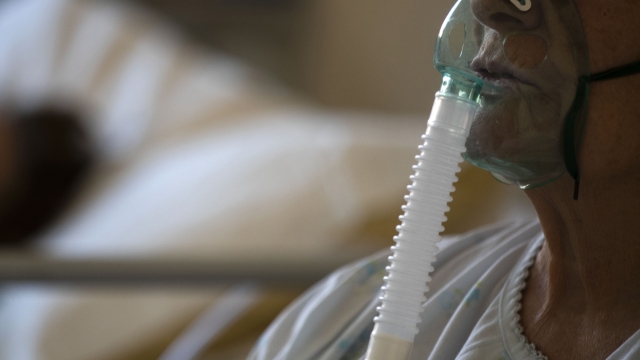 Doctors tell Newsy the majority of critical COVID-19 patients need mechanical ventilation for at least two weeks before they see any recovery.

For the severely sick, ventilators can be the difference between life and death, but they can come with some harmful impacts.

"The longer amount of time the patients are on a ventilator that reflects that their lungs are very slow to heal from COVID-19," Dr. Ben Singer, pulmonary and critical care specialist at Northwestern Medicine, told Newsy.

Estimates show the US could be 760,000 short of the needed ventilator stock. In the meantime, what is happening for patients in the United States?

Doctors tell Newsy the majority of critical COVID-19 patients need mechanical ventilation for at least two weeks before they see any recovery.

Ventilators use pressure to blow air in and out of the lungs, bringing oxygen in and taking carbon monoxide out. Doctors and nurses have to insert a tube in a patients’ mouth and  windpipe and monitor the patient with a machine hooked up to the tubes. They can adjust the pressure of the air, or PEEP, based on a patient's oxygen level.

"The ventilator's doing the work of breathing. So now you're not using your muscles. The machine is actually pushing each breath into you. So you require various amounts of pressure to achieve each breath initially," Dr. Brian Boer, pulmonary and critical care specialist at University of Nebraska Medical Center, told Newsy.

One new study found that of nearly 1,600 critically ill COVID-19 patients in Italy, 99% percent required respiratory support and 88% were intubated and put on a ventilator. Researchers guess the high rate of intubation and mechanical ventilation could be because these cases had severe hypoxia, or low blood oxygen levels. The more severe your case, the higher the PEEP, or pressure setting on the ventilator. Dr. Brian Boer helped design the ICU’s COVID-19 ventilator guidelines at University of Nebraska Medical Center and walked me through some of them. He says managing the PEEP is a balancing act.

"The more diseases are injured, your lung is, such as in COVID-19 or any form of ARDS the lung gets very, very stiff. And so you require much higher pressures or driving pressures with the ventilator to achieve the same size as breath. So you have to push harder and harder to get the air in. And not only that, to get the air in, once it's in the lung, the efficiency of the oxygen getting into the bloodstream and the carbon dioxide getting out of the bloodstream is lower and lower because the lung is so injured," Boer said.

The problem arises when patients have to stay on a high pressure ventilator setting for a long period of time. Every hour, every day on the ventilator increases the risk of lung injury or infection.

"They are at risk to develop a new pneumonia, usually caused by bacteria just by virtue of being connected to the ventilator," Singer said.

For those who survive, there are long-term physical and mental implications ahead, from learning how to eat and speak again to regaining cognitive function. Vanderbilt psychologist Dr. James Jackson has spent years researching the psychological impacts on former ICU patients. He says that in addition to the physical aftereffects, as many as 20% struggle with PTSD.

"We think that that the trauma of being critically ill and it includes being on a ventilator. But it's not only that. It's it's it's fear of dying. It's pain. It's the dynamic of being restrained," Jackson told Newsy. "They experience the insults the critical illness represents, they experience a heavy burden of trauma. And then, even though they survive, which we're really delighted about, they have a brand new list of difficulties that they didn't have before. They tend to have problems with their memory. They have problems with their attention. They have problems with something we call executive functioning. They can't balance their checkbook. They have a hard time driving. They can't read maps. They can't program a remote control. They're quite disorganized. And then a meaningful percentage of those folks have significant issues with depression."

There are less aggressive alternatives to mechanical ventilation, such as non-invasive oxygen cannulas or pumps. Some doctors have also stocked up on over the head devices. And in a few severe cases, a treatment usually reserved for heart patients, known as extracorporeal membrane oxygenation or ECMO, has been effective. That’s when the blood is re-routed and oxygenated in a machine, giving the lungs a chance to rest.

The FDA just issued new rules for ECMO and cardiopulmonary bypass devices to help expand the availability for COVID-19 patients. But if vents are expensive, costing up to $50,000, ECMO is even more so; it’s closer to $73,000 for one patient.

Newsy asked: For the majority of these COVID patients that are going into the ICU and being put on ventilators, is it ultimately causing more harm than good? Or right now, is this still the best line of treatment?

"Ventilators are absolutely the standard of care for people with COVID-19, who develop severe lung failure," Singer said.

Bottom line: Doctors still say they need ventilators to treat many of the severe COVID-19 cases. But those on the front lines told Newsy the more they learn about the coronavirus, the more they exercise caution.