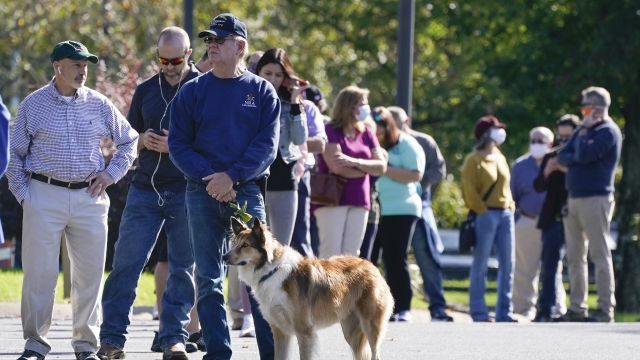 "This year, for the first time, you can vote early in person," Rhode Island Secretary of State Nellie M. Gorbea said Wednesday morning in kicking off the first day of early voting.

Kansas, Rhode Island and Tennessee kicked off early voting on Wednesday, with some voters facing issues that have become familiar this election cycle: Long lines.

"Take a look at this line behind me. It starts and wraps around about 10 parked cars," Hannah McDonald, a reporter at Newsy's sister station WTVF, said Wednesday.

Most states offer early in-person voting, but rules to do so vary nationwide. Some start as early as 55 days before election day or as late as the Friday before.

And more voters than ever are expected to take advantage of it this year. Already, nearly 14 million ballots have been cast — equal to roughly 10 percent of the total votes counted in the 2016 general election.

Experts say the voting pace is "remarkable," with voters in ten states already surpassing 20 percent of their 2016 total.

But the option — meant to reduce long lines and crowds on Election Day and pressure on the postal service — has become complicated by the pandemic, with many voters saying making a plan is important to avoid pitfalls.

"Just plan ahead and make sure that you realize that the lines may be a little bit longer but that sticking it out is totally worth it," Ben Yoder, an Indiana voter, told our sister station WRTV in a recent interview.

Ben Yoder and his friends voted early last weekend. He says turning voting into a social activity is an effective way to make your voice heard while boosting turnout.

"My group of friends decided to make a morning of it," Yoder explained. "I think spending time with your friends while you're waiting is a good way to pass the time because you can get your civic duty done and feel good about it."

Others, of course, don't have the luxury of that much time.

"I feel honored and with everything going on today, I felt especially motivated to get out here and stand in whatever length of line I have to be in," said Texas voter Rita Normand.