London's Tube Trains Might Need To Pump The Brakes 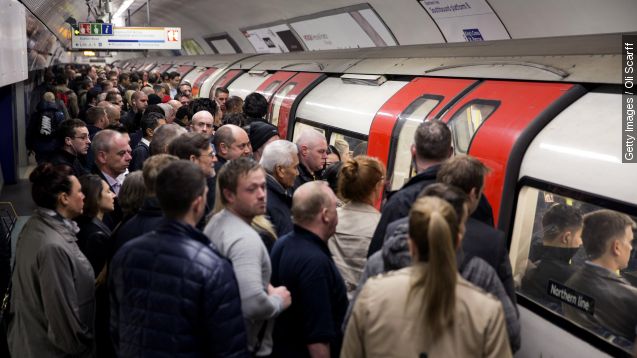 SMS
London's Tube Trains Might Need To Pump The Brakes
By Katie Link
By Katie Link
September 24, 2015
The London Underground might be too quick for its own good. Research shows trains are traveling too fast, which causes congestion at platforms.
SHOW TRANSCRIPT

A new study suggests the London Underground may need to slow down in order to speed up. Wait, what? (Video via Transport for London)

It turns out the trains of London's tube system travel about 8 miles per hour faster than they should, according to research spearheaded by a statistical physicist.

The underground trains currently travel at 21 miles per hour. Calculations reported in The Journal Royal Society Interface suggest this speed might cause congestion at the platforms, delaying the trains.

The researchers studied the "multimodal trips" — or journeys in which people take more than one form of transportation — in both London and New York City.

Researchers think multimodal travel is becoming more popular, and, therefore, more crowded, due in part to smartphone apps that help navigate the fastest route to a destination. (Video via Citymapper)

Computer models tracked the roads and underground trains in both cities to determine the connectedness and to see how the two "modes" of transportation affect each other. (Video via Metropolitan Transport Authority)

The lead researcher told the BBC, "Surprisingly enough, the network in New York is much more centralised than the one in London."

This study didn't include any passengers, and researchers told the BBC more work is needed before any major changes are made to the London tube system. For now, just keep minding the gap.