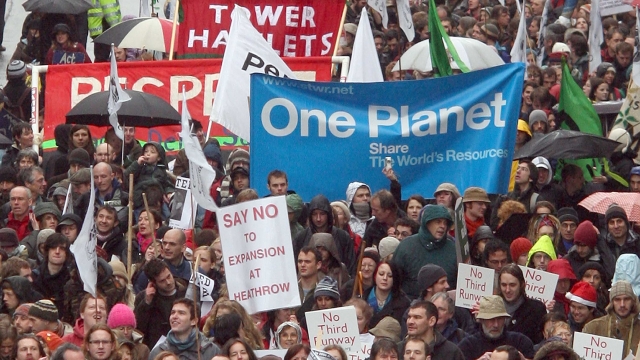 Protesters demanding actions to address climate change flooded the London financial district Thursday. They blocked the entrance of the London Stock Exchange and held banners at the famed Canary Wharf, declaring that a "business as usual approach" to global warming equals death.

The protests and street theater interrupted train services and created a disruptive spectacle across the city. But the organizing group, called Extinction Revolution, says the demonstrations have made their point: drawing attention to negative impacts major financial industries are having on the planet. Police have made more than 1,000 arrests in the week and a half of demonstrations.

"I think we’ve become hugely popular and politicians are aware of that," said Extinction Revolution activist Nuala Gathercole Lam. "There has been a shift toward understanding the urgency of this."

The urgency, the group says, is to vastly reduce pollutants contributing to global warming. The protesters have demanded the British government create a citizens assembly to help oversee a national program to reach zero carbon emissions by 2025.

Related climate protests have unfolded in New York, Berlin, Paris and at The Hague.