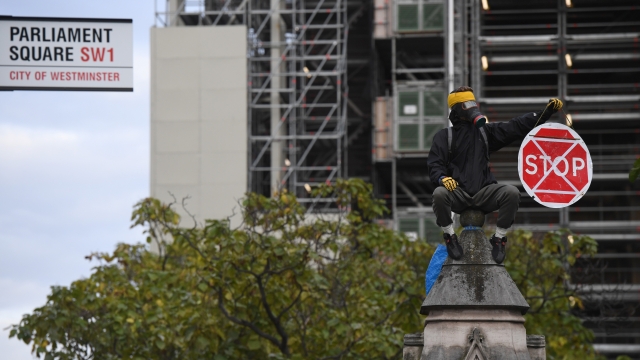 SMS
London Bans All Protests Linked To Climate Group Extinction Rebellion
By Antoinette Miller
By Antoinette Miller
October 15, 2019
The Metropolitan Police Service said protesters were made aware of the new changes, but that didn't stop them from demonstrating anyway.
SHOW TRANSCRIPT

On Monday, the Metropolitan Police issued a statement saying a section of the city's Public Order Act had been revised. The new condition says, "Any assembly linked to the Extinction Rebellion 'Autumn Uprising' … must now cease their protest(s) within London" by Monday evening.

The Metropolitan Police Service said protesters were made aware of the new changes, but that didn't stop them from taking to the streets Tuesday.

According to its website, "Extinction Rebellion is an international movement that uses non-violent civil disobedience in an attempt to halt mass extinction and minimise the risk of social collapse." The group's worldwide "Autumn Uprising" event was supposed last two weeks, but after just nine days, police say there have been nearly 1,500 arrests in London alone.

Metropolitan Police said the protests were banned to prevent "serious public disorder, serious damage to property or serious disruption to life of the community.

In the earlier days of the Autumn Uprising, London protesters occupied the city's airport, blocked streets around the Bank of England and sprayed fake blood at the Treasury in Westminster.

A member of the Metropolitan Police said that "if Extinction Rebellion, or any other group, come to us with a proposal for lawful protests, then of course we will discuss that with them."

Extinction Rebellion said in a statement it has taken "initial steps" toward a judicial review on the ban and will submit an application for an "urgent hearing" on Wednesday.