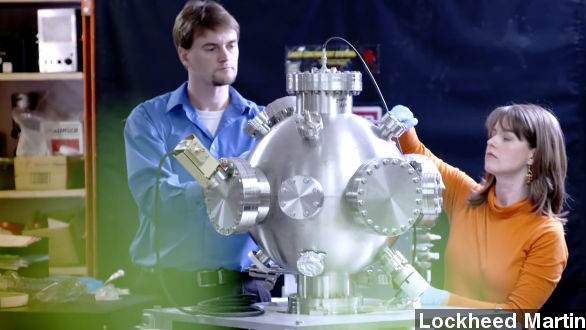 Lockheed Martin made a big announcement Wednesday saying its Skunk Works team is creating a compact fusion reactor (or CFR) that could be viable within the next few years.

Of course, a term like "compact fusion reactor" comes with an obligatory explanation: fusion reactors are a way to perform nuclear fusion, the process that powers the sun. High-energy atoms collide, create a new nucleus and give off tremendous amounts of energy. You might've also heard of nuclear fusion as a way to harness the energy of the sun and solve our renewable energy needs. (Video via YouTube / Crash Course, NASA)

There are plenty of fusion reactor concept designs out there, but Lockheed Martin says its design will be smaller — able to fit on the back of a truck — and give off far more energy.

The company touts its announcement as a huge breakthrough, but fusion experts and science writers are a bit skeptical, saying we shouldn't get too far ahead of ourselves.

Dr. Swadesh Mahajan, a thermonuclear plasma physicist at the University of Texas, told Mother Jones making a fusion reactor smaller is tough because you need tons of materials and tons of heat. He adds, "Getting net energy from fusion is such a [G-D] difficult undertaking." (Video via YouTube / Rajya Sabha TV)

A writer for Ars Technica says Lockheed Martin's plan is short on details and is only in the beginning stages. So why the hype? The writer guesses the company is "looking for commercial partners to help fund the intervening years of research that will be required. By making the developments sound inevitable, the company increases its chances of attracting someone to share the risk.

McGuire told The Washington Post, "We’ve strategically chosen this time because of our technical progress and exposure to our patents pending. We are also looking for partners to work with us on the project, plus we think it is important for the public and decision makers to understand the real promise that compact fusion has for our nation and the world as a near-term solution to our energy needs."

There are still a few unanswered questions about Lockheed Martin's plan — like how much money it'll spend on the endeavor. But the company says it'll be able to design, build and test a CFR within a year; produce a working prototype within five years; and deploy those reactors within a decade.