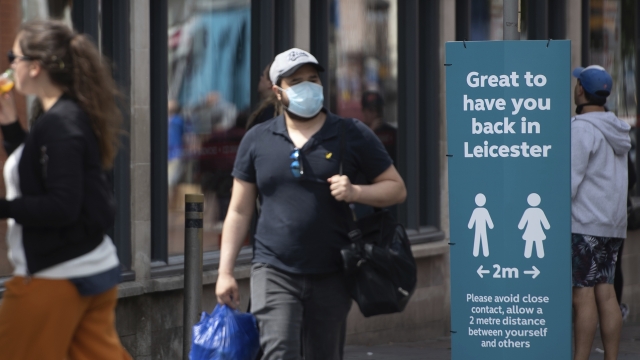 SMS
Lockdown Ordered For First City In U.K. After COVID-19 Outbreak
By Peter Hecht
By Peter Hecht
July 1, 2020
A coronavirus spike in Leicester is accelerating concerns over resurgence in a country with the world's highest per-capita death rate.
SHOW TRANSCRIPT

The United Kingdom is putting its first city under near-total lockdown. That's because a coronavirus outbreak in Leicester — England's 11th largest city and a major rail transit hub — is stirring fears of a renewed infection surge.

The spike in Leicester comes as COVID-19 deaths in the U.K. recently dropped to the lowest rate nationally in 12 weeks. But health officials fear that may be an illusion. The U.K. has had the world's highest per capita death rate since the beginning of the pandemic. It ranks fifth in total cases and third behind the U.S. and Brazil in total deaths.

The U.K.'s top health official said Leicester — a city of 330,000 people — had a seven-day infection rate that was "three times higher than the next highest city." Leicester had 1,000 new infections — one third of its total infections — since mid-June. Now its pubs and shops will stay closed as streets are clearing under a government stay-at-home order and this admonition from the city's public health director:

"From a public health point of view where I stand in Leicester at the moment. I am really pushing the emphasis of keep your contact to an absolute minimum," Ivan Browne, Leicester's director of public health, said.

Schools will shutter Thursday, other than for children of health care and other essential workers. Prime Minister Boris Johnson says the local steps are needed to ward off another infection surge nationally.

"As we approach July the fourth, I must say that the dangers, as we can see in Leicester, the dangers have not gone away. The virus is out there still circling like a shark in the water. And it will take all our collective discipline and resolve to keep that virus at bay," Johnson said.

Public health officials say Leicester may be more vulnerable to virus spread because of its densely-packed setting, where it's common for multiple family generations to share housing. But infectious disease specialist Bharat Pankhania says that isn't unique for the U.K.

"I feel that what has happened in Leicester could happen in any city, any city where there is a large population of people gathering, circulating amongst ourselves, socializing amongst themselves, and if you have somebody infectious you generate cases, you have a problem," Bharat Pankhania said.