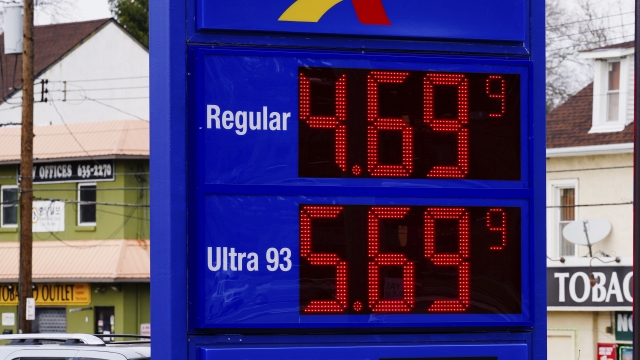 SMS
Gas Station Operators Forced To Raise Prices But See Little Profit
By John Mone
By John Mone
March 10, 2022
Newsy talks to local stations about where they get their profit as gas prices rise.

Rick White sells fuel, and since he got into the business in 1971, the Houston retailer says prices at the pump have always been anxiety-inducing.

"When I started out, we pumped your gas and it cost 26 cents a gallon," he said.

His customers certainly notice the rise in prices.

Through economic downturns or, at present, global instability, White says there's a reason why your local corner station sells a lot more than just gas.

"We're getting squeezed everywhere from the top or the bottom," he said. "Any gas station you go into, they sell gas to get you to stop into their store. I make more money on a Coke than I do on gas."

If White were to sell just fuel, he wouldn't be in business for very long because profit margins on that product alone are very very thin.

So what goes into the price at the pump?

Using federal government data, when regular was $3.41 in January, about 14% of the fuel cost was due to refining the oil. More than 15% went to marketing and distribution of the gas. More than 14% of that was federal & state taxes and the biggest factor — the price of crude oil per barrel — at close to 56%. For gas stations to make money, they need to mark up after wholesale purchase.

In his case, he has a modest convenience store, but the real money maker for him is his garage and mechanics.

"If we weren't doing auto repairs and inspection we wouldn't be here," White continued.

According to the National Association of Convenience Stores, the biggest misconception about gas stations is how profitable the gas sales are.

Keith Zahar's station in Crystal Beach, Texas, is really more of an adornment for the area hardware and grocery store.

"When prices climb, margins constrict. And it's not unusual to see 10-cent, 15-cent margins, which means even though gas prices are at record highs now, a lot of retailers are probably just breaking even on their gas," Zahar said. "You gotta make your money on Cokes, that's how you do it. You're selling other items in the store. That's what you're making your money on. You're pulling them in for fuel — That's exactly how it works because you're certainly not making money on the fuel itself."

He says when prices go up, his antipathy runs as high as any motorist filling up.

"When you're standing behind the counter, you're the lost luggage department at the airport, especially when the fuel starts going up," Zahar continued. "You're the bad guy and you have to take the heat. And it's hard to deflect because people are angry. You just have to take it."

Fuel costs are not only eating into the customer's wallet, but the shopkeeper's budget, too.