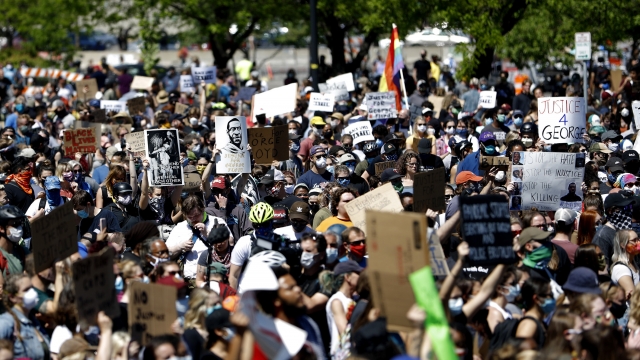 Local leaders have criticized President Donald Trump and his response to the civil unrest spreading across the country over the death of George Floyd.

On CNN's "State of the Union," Maryland Gov. Larry Hogan said one of the most important things a leader can do during public turmoil is to defuse tension, but Hogan says the president's words have only done harm.

Hogan, a Republican, said, "That's not helpful. It's not lowering the temperature. It's sort of continuing to escalate the rhetoric. And I think it's just the opposite of the message that should've been coming out of the White House."

The president has tweeted that Floyd's memory is being dishonored by rioters, whom he called "thugs." He also said "looting leads to shooting" and has threatened to use "vicious dogs" on protesters outside the White House in a vow to restore law and order.

Meanwhile, Washington D.C.'s Democratic Mayor Muriel Bowser said on NBC's "Meet the Press" that the people are angry and hurting because of systematic problems in race relations.

Bowser said, "The president has a responsibility to help calm the nation and he can start by not sending divisive tweets that are meant to harken back to the segregationist past of our country."

And, Democratic Mayor of Atlanta Keisha Lance Bottoms agreed that we are facing "a systematic issue" and said it "will take time to address" it.

"What I’d like to hear from the president is leadership. And I would like to hear a genuine care and concern for our communities and where we are with race relations in America," Lance Bottoms said.

Some of President Trump's allies have reportedly been urging him to address the nation. National security adviser Robert O'Brien told reporters Sunday that's a possibility.

U.S. Attorney General William Barr vowed to prosecute anti-fascist organizers and anarchists he said are conspiring to create chaos. Subsequently, President Trump made an announcement on Twitter saying the U.S. "will be designating ANTIFA as a Terrorist Organization."