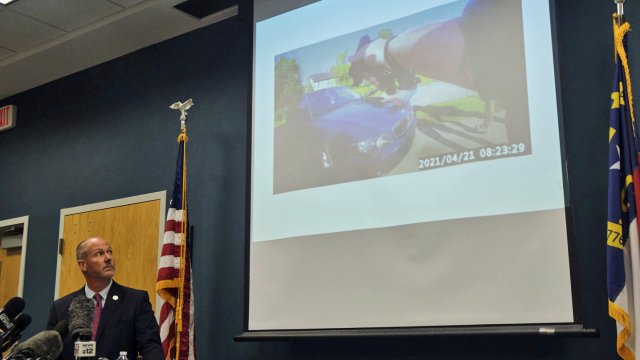 SMS
District Attorney: Police Shooting Of Andrew Brown Jr. Was Justified
By Jamal Andress
By Jamal Andress
May 18, 2021
The district attorney says Brown used his car as a "deadly weapon" and that deadly force by the officers was necessary.
SHOW TRANSCRIPT

After weeks of anticipation, a North Carolina district attorney announced there will be no criminal charges in the shooting death of Andrew Brown Jr.

Pasquotank County District Attorney Andrew Womble says Brown used his car as a "deadly weapon" and that deadly force by the officers on scene was not only justified but necessary.

"Brown's precise speed and attempting to flee and striking -- striking Deputy Lunsford is uncertain, but that he drove recklessly and endangered the officers is not uncertain. Therefore, I find that Brown's actions and conduct were, indeed, dangerous by the time of the shooting," Womble said.

Three North Carolina sheriff's deputies shot and killed Brown during a drug-related search warrant. Officers fired 14 shots at Brown, one hitting him in the back of the head. Brown was unarmed during the incident.

While body camera video of the incident has not been officially released to the public, DA Womble played short snippets of the incident from four cameras worn by officers on the scene.

Brown's family and their attorneys have called this shooting an execution, pointing to the gunshot wound in the back of Brown's head. They've also asserted Brown was trying to get away from officers and therefore was not a threat.

In reaction to the announcement, Brown family's attorneys said in a statement, "To say this shooting was justified, despite the known facts, is both an insult and a slap in the face to Andrew’s family, the Elizabeth City community, and to rational people everywhere."

District Attorney Womble said during his press conference that he did not speak to the family before making the announcement of no charges, saying the initial discussions between his office and the Brown family attorneys “did not go well.”

The FBI has opened a civil rights investigation into the incident which is ongoing.