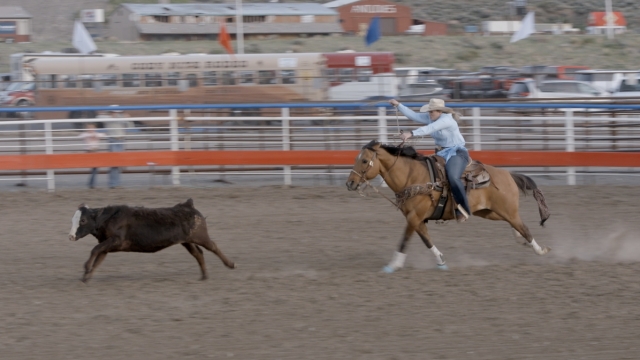 Under the lights in Cody, Wyoming, it's the first night of rodeo season, and the unofficial start of summer. But for all the competition seen in this arena, there's another competition people in the stands are talking about — and it doesn't take place for another year and a half.

Congresswoman Liz Cheney's constituents have not forgotten her vote to impeach President Donald Trump nearly five months ago. Despite her strong conservative record, voting with the former president about 93% of the time, they say that single vote should be enough to oust her.

Kevin Merrill has lived in Wyoming his entire life and used to spend his summer nights competing at the rodeo himself. A retired police officer, he's been on the Trump train all along, and does not believe the ten House Republicans who voted for impeachment deserve another term.

Merrill says people in Cody are so frustrated; he doesn't believe Cheney will even be able to hold a town hall in here, where roughly 77% of the people supported Trump in 2020.

But Cheney is not backing down from her vote. And she continues to call out the former president over false claims the election is stolen. It's cost her support here at home, her leadership position. and possibly her next election. Though she’s breaking her own fundraising records, with more than $1.5 million raised in the first quarter, her support is slipping.

A Yahoo News/YouGov poll in May found just 17 percent of Republicans nationally thought she should have stayed in a leadership position.

Cheney told Newsy, "My vote to impeach was compelled by the oath I swore to the Constitution. Wyoming citizens know that this oath does not bend or yield to politics or partisanship."

Retired Air Force lieutenant colonel and Sheridan County Republican Chairman Bryan Miller wants to be the person to replace her. He says her focus is entirely too much on what's going on in Washington and considering the opinions of those who are not her constituents.

So as Cheney tries hold off people like Miller and hold on to her seat. she's got a lot of people to rope back in.