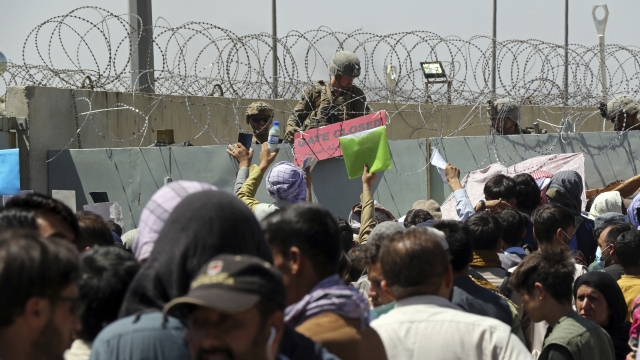 SMS
What It's Like Living As A Female Journalist Under Taliban Rule
By Terace Garnier
By Terace Garnier
September 2, 2021
The State Department told Newsy that Afghans should shelter in place until commercial flights commence at the airport.
SHOW TRANSCRIPT

As the war in Afghanistan ends after 20 years, Afghan Special Immigrant Visa applicants who were left behind are fearing for their lives, as they say Taliban soldiers are going door-to-door looking for those seen at the Kabul airport gates attempting to evacuate.

Among those trying to escape is one woman who is an English news assistant editor. She asked that her identity be hidden for her and her family's safety.

"Nobody believed that they would so easily take over Kabul," she said.

She says her father faithfully helped U.S. military forces and was granted Special Immigrant Visa status. He took his family to the airport to evacuate but they were unsuccessful.

"I told them we have an SIV case and I'm a journalist from this news agency and they said you are not allowed inside because of the lack of time," she said. "We are only allowing people with green card or have visa or passport. So that was the problem, we were unable to cross."

Now she says she is in hiding after Taliban fighters raided many of her neighbors' homes. But she is not the only one in hiding.

Another woman, a Pashto language editor, told Newsy, "I have received so many indirect warnings, since the arrival of the Taliban, I am predicting that I will be targeted now. Here, Taliban have shared their roles for media that women will not be allowed to work in media anymore and also they have banned music in radios & TV. I can't even go outside from the home I am hiding."

And a 23-year-old who is a reporter for an American network says the Taliban have ordered women to stay indoors, wear a hijab and if they leave their home without a male escort they can face brutal punishment. Her uncle translated for her.

"She is feeling very bad and she feels maybe every time someone comes to the house they will punish them asking, 'What is your job and what are you doing?' She is feeling really bad. She feels every time it is dangerous."

All three women are looking for a way to escape or waiting to hear from the State Department on what to do next.

"I applied and filled out so many forms of evacuation but none of them unfortunately give any response," the English news assistant editor said.

The State Department told Newsy that Afghans should shelter in place until commercial flights commence at the airport and those who submitted documents through the State Department's website will receive an email. But some of the women I spoke to are concerned the Taliban will start controlling internet access and they won't get those emails.