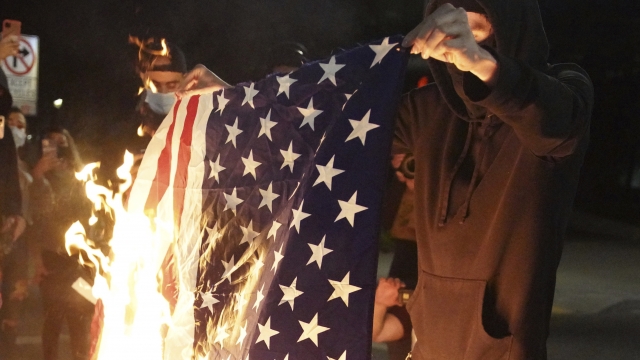 This weekend saw protests rage on in Portland, with police declaring an unlawful assembly on Saturday night but no serious violence. A counterprotest by far-right groups drew far fewer people than expected.

"Failure to adhere to this order may subject you to arrest, citation or crowd control agents including but not limited to tear gas or impact weapons."

Early demonstrations on Saturday were peaceful, but by nightfall the gatherings got rowdier. Hundreds of people were downtown just before midnight when the unlawful assembly was declared. Protesters had been shooting fireworks at police, and one burned an American flag.

Officers made arrests and seized weapons from protesters.

Oregon Gov. Kate Brown had declared a state of emergency Friday over white supremacist groups traveling to the city. She ordered state troopers and sheriffs deputies to help keep the groups apart.

"Look, we're really, really clear that hate has no place in the city of Portland and the entire state of Oregon. Our law enforcement is absolutely committed to protecting free speech and they are going to work extremely hard to de-escalate the situation by keeping the groups apart," Brown said.

The city was expecting a far-right Proud Boys rally that night to draw thousands, but only around 200 showed up. Some of those who did wore law-enforcement-like uniforms, including body armor and weapons. The group is known for its willingness to use violence, but in this case there were few reports of it.