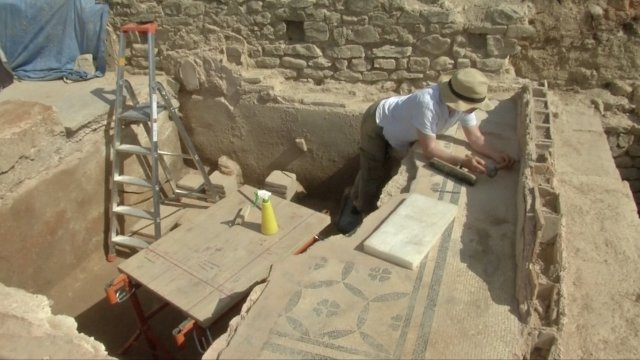 By Ryan Biek
August 8, 2017
The ruins are an ancient Roman neighborhood in a modern-day suburb of Sainte-Colombe, France, south of the city of Lyon.
SHOW TRANSCRIPT

French archaeologists continue to unearth what they're calling a "little Pompeii."

The ruins are an entire Roman neighborhood in the modern-day suburb of Sainte-Colombe, France, which is about 18 miles south of Lyon.

Finding a 75,000-square-foot archaeological site is impressive on its own, but how it was preserved makes it even more notable.

It's being dubbed "little Pompeii" because, just like the famed Italian site preserved by a volcanic eruption, these ruins in France were frozen in time by two large fires.

NPR paraphrased one archaeologist as saying, "It's like having a photograph of what life was like 2,000 years ago."

So far, they've uncovered a marketplace that's like a mall, as well as a plumbing system, a possible school and mosaics on floors of homes that belonged to nobles.

The site is open to 30 public visitors each Tuesday. Archaeologists expect to work on the ruins until the end of this year.