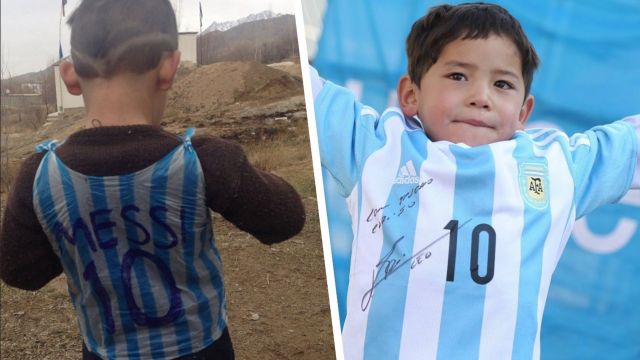 SMS
Little Afghan Boy Finally Gets A Real Lionel Messi Jersey
By Matt Moreno
By Matt Moreno
February 25, 2016
UNICEF and soccer star Lionel Messi teamed up to give a jersey to a boy who used a plastic bag to create a makeshift Messi uniform.
SHOW TRANSCRIPT

UNICEF and Messi teamed up to give 5-year-old Murtaza Ahmadi an authentic, signed jersey and soccer ball.

Murtaza is a huge fan of the Argentina / FC Barcelona star.

He said, "I love Messi, and my shirt says Messi loves me."

The Internet searched for the boy's identity after the original picture showing him wearing a jersey made out of a plastic bag first surfaced.

Along with the jersey and ball, the little boy might also get to meet his hero.

Messi's reps are reportedly working on flying Murtaza out to the team's facility in Spain.

This video includes a clip from Radio Free Europe/Radio Liberty and images from UNICEF and Getty Images.