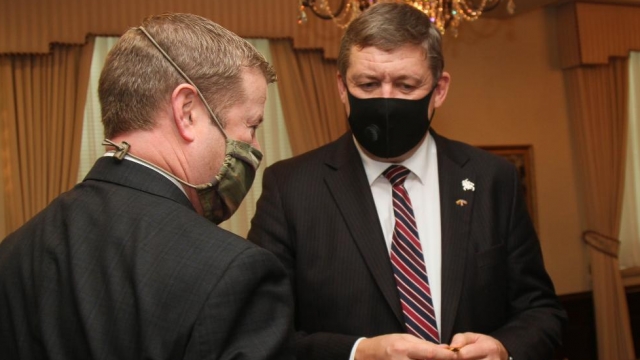 SMS
DOD Leaders Won't Quarantine After Contact With COVID-Positive Person
By Terace Garnier
By Terace Garnier
November 20, 2020
Pentagon senior leaders are not quarantining after coming in contact with the Lithuanian defense minister, who tested positive for COVID-19.
SHOW TRANSCRIPT

Concern is rising here at the Pentagon. Senior leaders are not quarantining even after coming in contact with the Lithuanian defense minister, who tested positive.

Newsy has confirmed the secretaries of the Army, Air Force and Navy were in contact with Minister Raimundas Karoblis this week. Acting Secretary of Defense Chris Miller was, too. But again, none of them are quarantining.

According to Pentagon spokesman Jonathan Hoffman, “senior leaders have been tested since the meeting” on Nov. 13.

He added, “Additionally, DOD personnel who had contact with the delegation have received or are receiving at this time rapid COVID tests as deemed necessary based on CDC protocols.”

That’s in question, though, because with this type of exposure, the CDC recommends quarantining for 14 days. Instead, the department claims testing and mitigation measures were in place.

At least one senior official, Anthony Tata, has tested positive. He is in isolation.