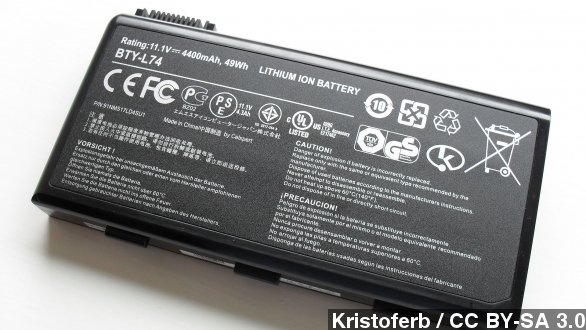 By Erik Shute
July 28, 2014
Stanford University published its findings for a "pure" lithium ion battery that could have our everyday devices and electric cars running longer.
SHOW TRANSCRIPT

​Stanford University researchers say they've developed a "pure" lithium ion battery, and it could have us sending emojis, streaming music and driving electric cars up to four times as long.

Their work, published in Nature Nanotechnology, overcomes a problem engineers have spent years trying to solve: creating a lithium anode.

Every battery contains three distinct parts: an electrolyte, the cathode and the anode. The anode is used to send out the electrolyte's electrons to power the device. The cathode receives them after they've completed the circuit.

You'll find a lithium battery in the majority of devices you own. They're even powering today's electric cars. But currently, lithium is only found in the battery's electrolyte. Researchers say an anode made of lithium would be incredibly efficient and outlive today's batteries four times over. (Via Getty Images | Wikimedia Commons)

One researcher said, "You might be able to have cell phone with double or triple the battery life or an electric car with a range of 300 miles that cost only $25,000." (Via Phys.org)

Lead researcher Yi Cui went so far as to call it the "holy grail" of batteries. For years, research has shown the lithium anode is efficient, but the problem scientists had to overcome occurred while charging the battery.

Charging a battery with a lithium anode causes the lithium to expand unevenly and eventually break down — or even explode. Stanford University's prototype uses a shield made of flexible carbon to protect the lithium from breaking down. This shield is tiny, only 20 nanometers thick, and can expand with the lithium to protect it.

So enough technical jargon. When can you see it in your Kindle or Tesla? Gizmodo and ExtremeTech pointed out this miracle battery might be just out of our reach.

To be "commercially viable," lithium ion batteries must have a charge efficiency of 99.9 percent. This means the battery nearly gives as much energy as it receives. Right now, Stanford's pure lithium anode sits at just 99 percent efficiency. So, pretty close, but strict regulations mean this technology won't be powering the iPhone 6 and maybe even the 7. (Via Getty Images)

Not to mention TV news stations ran with bad news for lithium ion batteries Monday. This teen's smartphone caught on fire while she was sleeping, and an overheated lithium ion battery was likely to blame. (Via ABC)

The tech media sector seemed to agree the technology is at a nascent stage, but it could also be the spark needed to fuel the next generation of smartphones and other electronic devices.