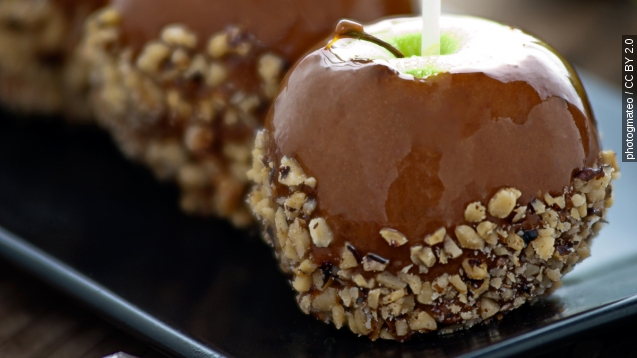 SMS
Listeria Can't Grow On Apples, Caramel; Why Caramel Apples?
By Christine Slusser
By Christine Slusser
October 14, 2015
After researchers studied a listeria outbreak in caramel apples, they found neither the caramel nor the apples caused bacterial growth. What was it?
SHOW TRANSCRIPT

Mmm caramel. The only thing that makes it better is when you eat it with apples.

And if you're making this combo happen — maybe with some extra toppings, like nuts or chocolate (you animal, you) — make sure you refrigerate it, too.

Because no one wants listeria bacteria. And that's a risk you take if you don't let those apples chill.

Last year's caramel apple listeria outbreak came as a bit of a surprise because, as a new study says, apples are thought to be too acidic to have listeria — and caramel doesn't have enough free water for the growth.

But, somehow, this combination killed seven people and made at least 35 ill.

In that study published in the journal mBio, researchers discovered it wasn't the apple or the caramel, but the stick inserted into the apple that caused the problem.

"Inserting a stick into the apple releases juice to the interface between the apple and caramel, providing a more hospitable environment than either component alone," a researcher said.

And the unrefrigerated caramel apples with sticks had significant growth. It's a good idea to refrigerate anyway, as most caramel contains milk.

And you wouldn't leave a gallon of milk sitting out either, right?