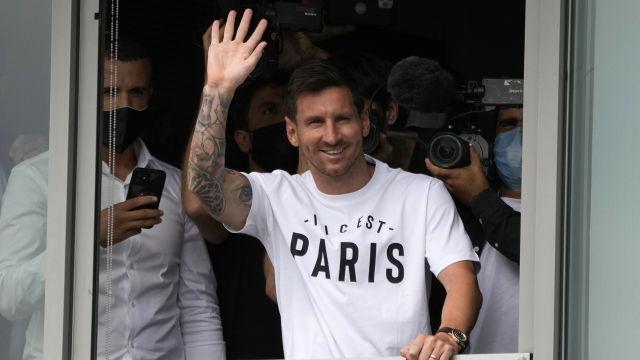 SMS
Soccer Star Lionel Messi Agrees To Sign With Paris Saint-Germain
By Associated Press
By Associated Press
August 10, 2021
34-year-old Messi is set to sign a two-year deal worth $41 million annually after leaving Barcelona where he played since he was 13-years-old.

Lionel Messi finalized agreement on his Paris Saint-Germain contract and arrived in the French capital on Tuesday to complete the move that confirms the end of a career-long association with Barcelona.

The 34-year-old Argentina star has agreed a two-year deal with the option for a further season, a person with knowledge of the negotiations told The Associated Press. The person spoke on condition of anonymity to discuss the contract ahead of it being signed and the official announcement. Messi is set to earn around $41 million net annually, the person said.

PSG supporters have seen their club transformed over the last decade since the influx of Qatari sovereign wealth investment linked to the emir.

Once Messi's Barcelona contract expired — and the Catalan club was unable to afford to keep him — PSG was one of the few clubs that could finance a deal to sign the six-time world player of the year.

Messi became the most desired free agent in soccer history after his attempts to stay at Barcelona were rejected last week by the Spanish league because the salary would not comply with financial regulations, with the Catalan club burdened by debts of more than $1.4 billion.

PSG coach Mauricio Pochettino quickly made contact with his fellow Argentine after Barcelona announced last Thursday that Messi would be leaving the club he joined as a 13-year-old.

Messi won every major honor with Barcelona and was granted a tearful exit news conference on Sunday to signal the end of an era. Only Cristiano Ronaldo in the current era challenges Messi's status as an all-time great.