Lindsey Graham's A Hawk, But Not The Only One In The Running 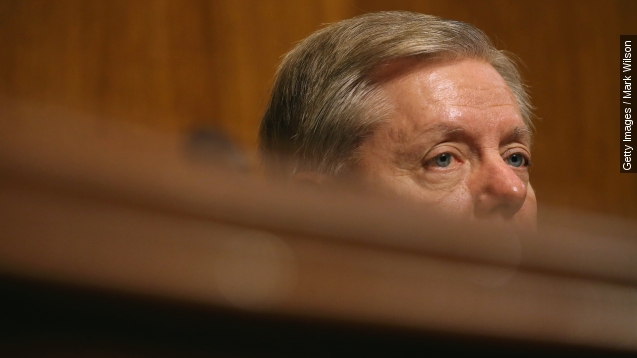 "Radical Islam is running wild. ... They are large, they are rich, they are entrenched. As president I will make them small, poor and on the run," Lindsey Graham said in his presidential campaign announcement.

Lindsey Graham thinks the world is falling apart. Specifically in the Middle East.

"I'm running because I think the world is falling apart. I've been more right than wrong on foreign policy," Graham said on "CBS This Morning" in May.

With his campaign for the 2016 GOP presidential nomination now officially official, look for him to distinguish himself from the pack by focusing abroad — especially on Iraq, Iran and ISIS.

"The last place in the world you want nuclear weapons is the Middle East. Why? People there are crazy," he said at an event in 2013.

And last month he said: "You're thinking about joining Al-Qaeda or ISIL ... I'm not gonna call a judge. I'm gonna call a drone. And we will kill you."

So he's got a penchant for headline-grabbing overgeneralizations, but unlike his competitors, he's been public about his positions and plans.

On ISIS, Graham has said he would put 10,000 troops on the ground in Iraq to counter the Islamic militant group. That would be an increase of 7,000 from the 3,000 already there, and he's readily admitted he thinks "More American soldiers will die in Iraq and eventually in Syria to protect our homeland."

And on Iran, he hasn't minced words.

"Iran is our enemy. They're a cold-blooded cruel regime that's killed American soldiers in Iraq and Afghanistan. ... I fear them more than I fear ISIL," he told NBC.

He's laid out eight principles for what he's called a "sound, enforceable deal" with Iran — including "anytime, anywhere inspections of all Iranian military and nonmilitary facilities."

That said, for as much attention as Graham gets for his hawkish stance on foreign policy, FiveThirtyEight's Harry Enten notes he won't be the only one. Rick Perry, George Pataki and John Kasich favor boots on the ground against ISIS, too.