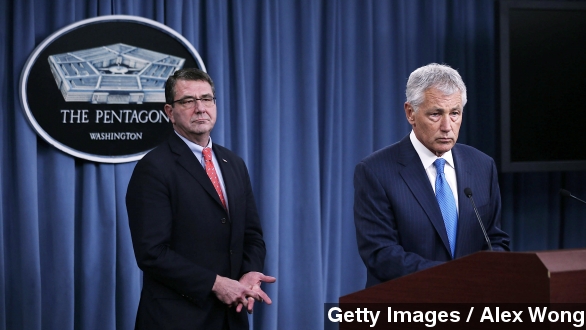 Ashton Carter is a familiar face around the Pentagon, having served in the No. 2 spot for two years. Now, he's reportedly President Obama’s leading candidate to succeed Chuck Hagel as Secretary of Defense.

CNN, The Washington Post and The New York Times all cite anonymous officials within the Obama administration saying Carter is next in line for the job, barring any last-minute complications. (Video via U.S. Department of Defense)

Carter has an unusual resume. He hasn't served in the military but earned a bachelor's degree in physics and medieval history from Yale and a doctorate in theoretical physics from Oxford.

The Washington Post calls him one of the "rare high-ranking Pentagon officials who had a granular understanding of how its most sophisticated weaponry worked."

But the challenge ahead of him is a lot more big-picture: if he gets the job, Carter will be tasked with leading the fight against ISIS and overseeing the winding down of the war in Afghanistan, and he'll need to be able to act decisively. So is he right for the job? (Video via U.S. Department of Defense)

John McCain, who will soon chair the Senate Armed Services Committee, told reporters Tuesday he thinks Carter is qualified, but went on to predict Carter won't be able to make his voice heard in the Obama administration.

That's kind of a recurring theme. Journalists who cover defense say the real challenge for the next defense secretary will be getting the other department leaders and the administration to listen to what he has to say, and that's something Carter has never had to do.

"Ash Carter, very well respected, but he really is part of the old existing leadership at the Pentagon. ... Will he really be able to deal with that White House micromanagement?," CNN correspondent Barbara Starr said.

But he also might be the administration's only real option. After Hagel announced his resignation, some of the top contenders for the job included Jack Reed, Michèle Flournoy and Jeh Johnson, but all three of them have since asked not to be considered.

The general consensus is that Carter will be a safe choice to avoid a lengthy confirmation battle, though the president can still change his mind.