LightSail And Tech Like It Could Give Space Travel A Boost 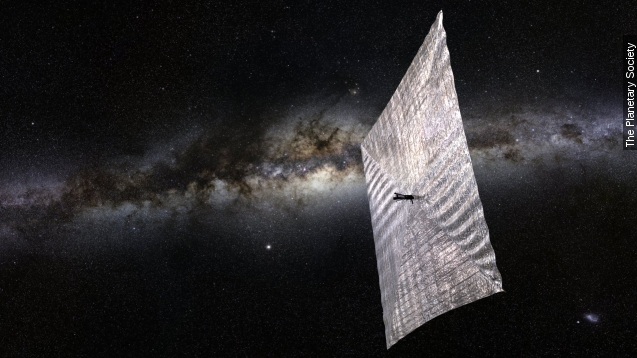 SMS
LightSail And Tech Like It Could Give Space Travel A Boost
By Evan Thomas
By Evan Thomas
May 20, 2015
LightSail is a proof-of-concept solar sail from The Planetary Society. It's the latest of several tests of solar propulsion technology.
SHOW TRANSCRIPT

The latest advances in spaceflight are taking their cues from ancient technology. The nonprofit Planetary Society is preparing to test LightSail, a fuel-less solar sail.

Despite its name, a solar sail doesn't use the charged particles of the solar wind. Instead it catches the tiny but constant pressure of photons — the light itself — to build up speed.

"Sunlight, or light, even though it has no mass, has momentum. So it can push these things through space. It’s a really extraordinary idea," CEO Bill Nye said. (Video via The Planetary Society)

LightSail will be packed into a tiny payload called a CubeSat. It's hitching a ride to orbit aboard the launch of the U.S. Air Force's X-37B spaceplane test platform Wednesday.

This showcases one of the benefits of a solar sail. Not needing fuel reduces both the expense and the overall risk of a given launch. Jason Davis, of the Planetary Society, explained to Space.com: (Video via The Planetary Society)

"The group buying the rocket — the primary payload — they get a little bit nervous about, say, 10 miniature fuel banks on your CubeSat when they have a multimillion-dollar payload sitting on top of it."

The Planetary Society is sharing its data with NASA, which is pursuing the tech for many of the same reasons. Another benefit: Sails can reach crazy speeds. One of the lead engineers on the LightSail project told Wired it's enough for interplanetary travel and maybe beyond. (Video via NASA)

"The absolute best mission is to use conventional propulsion to get as close to sun as possible. Then deploy your sail. By [the] time you get to Mars, you're just screaming, and you can dump the sail."

NASA tested the concept with the NanoSail-D back in 2011. It was comparatively tiny — 100 square feet — but still reflective enough to spot with the naked eye from the ground. (Video via NASA, NASA’s Marshall Center)

Japan's space agency made the first successful interplanetary sail flight with IKAROS, which stretched more than 2,000 square feet and made a flyby of Venus before orbiting the sun. (Video via Japan Aerospace Exploration Agency)

NASA now has two other sail missions in the works: Lunar Flashlight will send a sail to orbit the moon, where it will reflect sunlight to illuminate craters on the dark side in search of water.

And NEA Scout will act as a proof of concept for propulsion to nearby asteroids.

LightSail's first test, meanwhile, is doomed to burn up in Earth's atmosphere. It won't get high enough to escape the planet’s gravity for more than a month or so.

This video includes images from NASA and Wikimedia Commons.