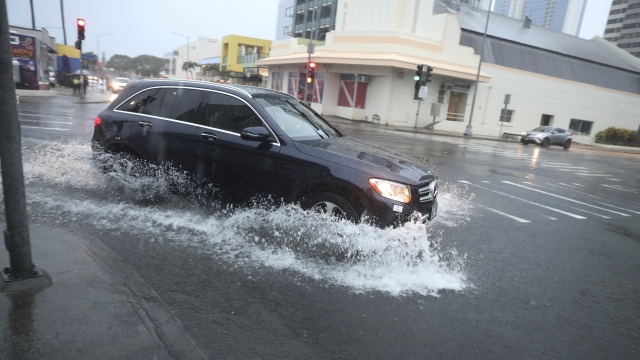 The National Weather Service said the storm brings the threat of "catastrophic flooding" in the coming days as a low-pressure system slowly moves from east to west and lingered on the edge of the archipelago.

"Now is the time to make sure you have an emergency plan in place and supplies ready should you need to move away from rising water," said Gov. David Ige, who issued a state of emergency for all of the state's islands Monday night.

On Oahu, where four shelters had been opened, most of the beaches in Waikiki were empty Monday as only a few people walked with umbrellas during passing heavy showers. Roadways were flooding in the area and cars crept through downtown as water gushed out of manhole covers.

One boy was rescued after he released his grip on a branch and the rushing waters took him to firefighters close by downstream, who grabbed him. Firefighters used a ladder to rescue another boy farther downstream and jumped into the stream to get the other three out of the water, the statement said.

None of the boys was injured and the fire department said that they had gone into the stream to play after school.

On Maui, power outages and flooding already have been reported, with more than a foot of rain falling in some areas.

All islands still face the threat of flash flooding, lightning strikes, landslides and strong winds, according to the National Weather Service.

The winter weather system known as a Kona low prompted emergency alerts throughout the weekend while delivering wind, rain and even blizzard conditions at some of Hawaii's highest elevations.

Kona low is a type of low-pressure system that forms near Hawaii during the winter season, and it has some unique meteorological characteristics.

"Normally the trade winds move from the east to northeast and they bring those warm winds and dry air that we love about the islands," Newsy meteorologist Scott Withers said. "But there's a low-pressure system bringing tropical rain and moisture up from the Southwest and that's why we're seeing all this heavy rainfall."