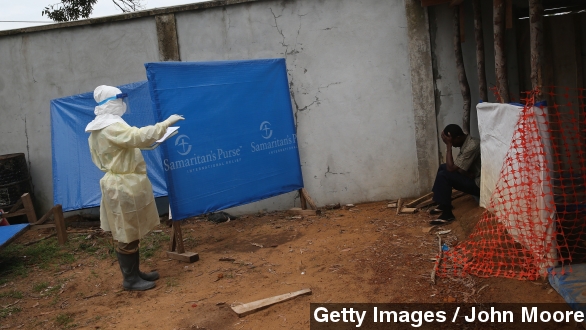 By Matt Picht
October 2, 2014
Liberian officials say they intend to prosecute an Ebola victim currently being treated in the U.S. because he allegedly lied on a health survey.
SHOW TRANSCRIPT

Liberian officials announced Thursday the first Ebola victim to be diagnosed in the U.S. could face prosecution for allegedly lying during an airport screening process.

Thomas Eric Duncan, who's currently being treated at a Dallas hospital, left Liberia on Sept. 19 after he contracted the virus but before displaying any symptoms. At a Liberian airport, Duncan filled out a health questionnaire asking whether he'd come in contact with an Ebola patient in the past 21 days. (Video via NBC)

Duncan apparently answered "no," but, as The New York Times reports, he did help transport a family friend with Ebola to and from a Liberian hospital four days before leaving the country. That patient died of the disease hours after Duncan last came in contact with her.

The head of Liberia's airport authority told reporters the country's justice department plans to charge Duncan for knowingly providing false information on an official form and for endangering lives.

A lawsuit is probably the least of Duncan's worries at this point — he's currently listed as in serious but stable condition at Texas Health Presbytarian Hospital. (Video via KTVT)

And, as CNN's Sanjay Gupta points out, it could be hard for Liberian authorities to prove Duncan willfully lied on the questionnaire.

"I think some of the details do matter here. Did he in fact know that the person who was sick in fact had Ebola?"

So why is Liberia announcing its plans to prosecute Duncan now? It might have something to do with the country's image.

Mashable highlights remarks from the official announcing the lawsuit, who said infected Liberians traveling to other countries "have brought a 'stigma' upon Liberians living abroad."

The Los Angeles Times reports members of Texas's Liberian community report being harassed since Duncan's case was made public.

Liberia has been one of the hardest hit countries during the Ebola outbreak. Of the 3,300 deaths caused by the epidemic, Liberia has accounted for almost 2,000, according to World Health Organization estimates.