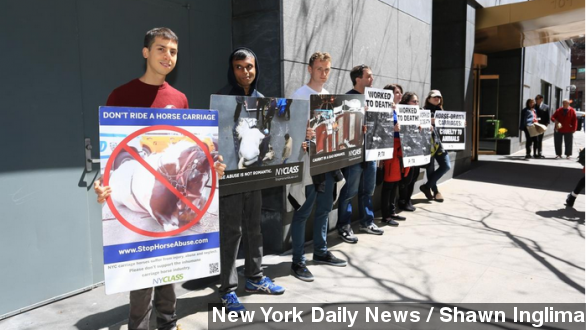 Hollywood actor Liam Neeson got quite the Easter weekend surprise after a group of protestors gathered outside his New York City home.

Some 50 animal rights activists lined-up outside the actor's condo on Manhattan's upper west side Saturday to protest his support for the city's carriage horse industry. (Via WNBC)

​​Neeson interjected himself into the heated debate over whether to outlaw horsedrawn carriages in the city last week when he visited Central Park's stables and penned an Op-Ed for The New York Times titled Carriages Belong In Central Park. (Via WABC, News 12 Long Island)

New York City Mayor Bill De Blasio says the carriage horse industry is inhumane, and has pledged action to bring the Central Park tours — a tradition in the city for more than 150 years — to an end. (Via New York 1)

A potential City Council vote on the issue has brought supporters from both sides out in full force in recent weeks.

In his piece for The New York Times, Neeson notes the carriage horse industry is overseen by at least five regulatory agencies, and that he saw no signs of horse mistreatment during his visit to the stables.

"I can appreciate a happy and well-cared-for horse when I see one. It has been my experience ... that horses, much like humans, are at their happiest and healthiest when working. Horses have been pulling from the beginning of time. It is what they have been bred to do."

Neeson also urged Mayor De Blasio to visit the stables and see how the horses are cared for before bringing a vote on the issue to city council.

Mayor De Blasio has proposed the city do away the classic horsedrawn carriages in favor of electric powered vintage style cars, which could be used to do the tours around Central Park. (Via WNYW)

The latest Quinnipiac poll shows 64 percent of New Yorkers favor keeping the carriage horses. Neeson did not emerge from his home during Saturday's protest.