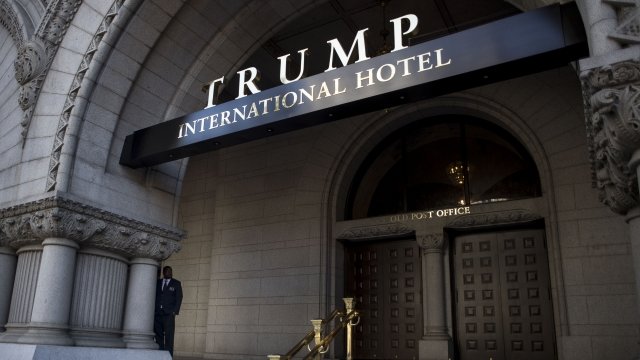 SMS
Human Rights Campaign Projects CDC 'Banned' Words On Trump Hotel
By Briana Koeneman
By Briana Koeneman
December 20, 2017
The group, along with artist Robin Bell, projected the words onto the side of the Trump International Hotel in Washington, D.C.
SHOW TRANSCRIPT

The Human Rights Campaign had an interesting response to reports that the Centers for Disease Control and Prevention is barred from using certain words in documents for next year's budget.

The group, along with artist Robin Bell, projected the reportedly banned words onto the side of the Trump International Hotel in Washington, D.C., on Tuesday.

The HRC's director of government affairs said in a statement, "This kind of erasure has potentially catastrophic consequences beyond the words used by the CDC — it could impact the very programs most vital to the health of transgender people, women, youth and others."

According to a report from The Washington Post, the Trump administration asked the CDC not to use seven words — "vulnerable," "entitlement," "diversity," "transgender," "fetus," "evidence-based" and "science-based."

But CDC Director Brenda Fitzgerald said in a series of tweets there are "no banned words" at the CDC and added that the agency "will continue to talk about all our important public health programs."