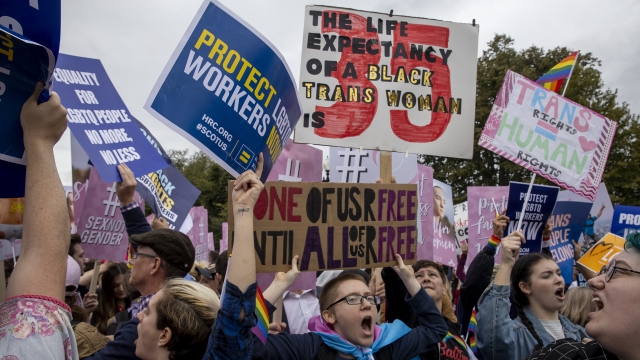 Just a few years ago, the U.S. Supreme Court established the right to same-sex marriage — a landmark for civil rights. On Tuesday, the court considered a trio of cases that could be just as significant: whether LGBTQ workers are protected under federal law.

At issue is Title VII of the 1964 Civil Rights Act, which prohibits discrimination based on a number of factors, including sex. Under the law, sex is defined as a person’s status as biologically male or female. LGBTQ activists are pushing for the court to expand that definition to include sexual orientation and gender identity.

In each case, the plaintiffs allege they were fired for being gay or transgender. Their employers, though, contend they were dismissed for misconduct or insubordination.

If the court eventually limits the definition of sex, it could put millions of LGBTQ Americans at risk of discrimination. But an expansion of Title VII could potentially affect other anti-discrimination statutes.

Outside the courthouse, LGBTQ rights activists demonstrated against the possibility that, under the law, they could be "married on Sunday, fired on Monday."

Model and activist Geena Rocero said: "For me, this case and this very historic moment, it's incredibly such an honor to be here, to be here with my community, as an out and proud transgender woman of color, a proud immigrant."

Rocero continued: "It's important that I share my voice and my story in this moment in time where trans people, specifically trans people of color, are being murdered, being dehumanized. And in this moment in time, where the [Trump] administration is telling us that we don't matter. We're here in front of the Supreme Court, in front of the people that love us and with our community, to tell the administration that we matter and we're not going anywhere."

Demonstrator Triana Arnold-James said: "I have a few family members that are part of the LGBTQ community. And if they're not allowed to work where they want to work because of the decisions that they made in their personal lives, then I think that's a tragedy."

Arnold James added: "I think it's awful that we have to be here to just, you know, to just assert our rights - I think that's sad."

Demonstrator Shakina Nayfack said: "I was talking about it with my partner on the way up here and I was, like, look, 'It might not go our way, we won't know until the summer time.' And I want to be prepared for that emotionally because it sucks when you feel like your government is out to get you."

Nayfack continued: "But at the same time, we have to have the faith that eventually, the American people are going to realize that all human beings are entitled to the same dignity and protections under the law."

Emilie Kao of The Heritage Foundation, a conservative think tank, told Newsy that Civil Rights Act protections apply to all people, including those who identify as LGBTQ. Kao said several cases over the years have established sex discrimination as "when a female is treated more poorly than a similarly situated male or vice-versa."

She said the cases presented on Tuesday were asking whether the courts can alter the meaning of "sex" at will, and that the decision could have "far-reaching consequences for sex-based distinctions in other areas of the law, including privacy in single-sex facilities like homeless shelters and separate sports teams for women and girls."

Gerald Bostock is one of the plaintiffs whose case was argued before the court. He appeared at the National Press Club following the hearing and said his fight was necessary given the scope of the issue.

Bostock said: "Through my journey with this, I realized early on that this is not just about me. It is a national issue, and somebody needed to stand up and confront this head-on. And I was willing to do it because I don't want anyone else to have to go through what I've gone through for the last six years in my life, plain and simple."