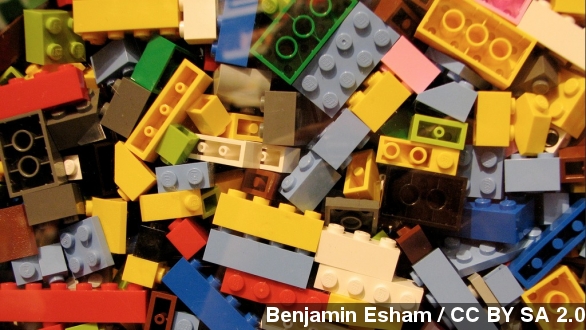 SMS
Let Girls Build Spaceships, 1970s Lego Note Tells Parents
By Katherine Biek
By Katherine Biek
November 25, 2014
A note in a Lego set from the 1970s encourages parents to let their children "create whatever appeals to them."
SHOW TRANSCRIPT

Lego fans call the toy timeless — but words on a pamphlet in a Lego set from the 1970s are decidedly modern.

The note reads: "The urge to create is equally strong in all children. Boys and girls. ... You build whatever comes into your head, the way you want it. ... A lot of boys like dolls houses [sic]. They're more human than spaceships. A lot of girls prefer spaceships. They're more exciting than dolls houses. The most important thing is to put the right material in their hands and let them create whatever appeals to them."

The photograph of the note was originally posted to Reddit Friday.

Technology expert Henry Warren reposted the photo on Twitter and said, "Lego had it nailed in the 70's."

The person who took the photo and posted it to Reddit told BuzzFeed, "I came across the pamphlet whilst playing Lego with my niece and nephew at their Grandma's house and it struck me as [a] particularly modern message for something written 40 years ago."

Still, some thought the note might be fake, so io9 reached out to the Lego company to confirm its authenticity.

A company spokesperson explained the note was from 1974 and was slipped inside Lego dollhouse sets during that time.

Now, to be sure, many of the company's advertisements — which you can find on YouTube — feature boys playing with superhero sets and girls with princess sets.

But what's interesting about that note is that it could've been written today. It promotes an idea that's been at the center of quite a few ad campaigns in the past year.

Last November, GoldieBlox, a company that specializes in engineering toys for girls, released a commercial promoting the idea that girls need "more choices in the pink aisle" at stores.

"Hey, careful with that. Why don't you hand that to your brother?"

And this summer, Verizon created a campaign to encourage girls to pursue more male-dominated fields like math and science.