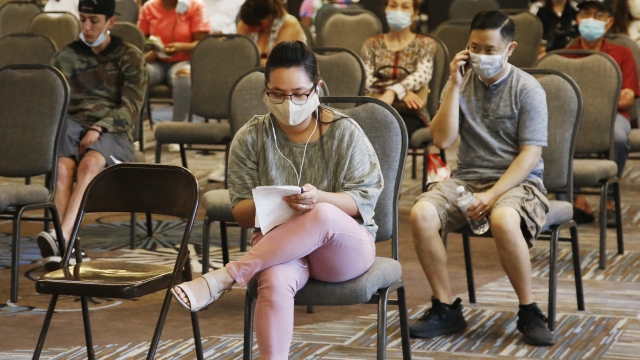 NEWSY HOST LAUREN MAGARINO: "We have the weekly jobless numbers. Can you break down the rest of the report for us?"

NEWSY REPORTER BIANCA FACCHINEI: "Yes. So 963,000 workers filed jobless claims last week, which, as you said, finally below the 1 million mark for the first time in months since the very beginning of the pandemic. And you know some more good news is that economists of course were not expecting this. Most of them were expecting, on average, about 1.1 million workers to file claims, which would have been about the same as we saw last week. So it's good news that these falling claims. It's finally being triggered a bit faster, but it's still happening pretty slowly. I mean, this number is still very big, so we shouldn't get too ahead of ourselves. I mean, just to put it in context during the great recession — this is something you and I talked about the very beginning of the pandemic — the highest number we saw on a weekly basis was about 660,000. So this is still very big. It's a very unique time for the labor market still, but it is good news that it's starting to slow down a bit more. However, economists are still very worried that if we cannot slow the spread of the virus quickly enough, and if we don't provide enough economic relief immediately to Americans that the slowdown could disappear."

MAGARINO: "Now we know that the pandemic has taken a toll on the national debt. What can you tell us about that?"

FACCHINEI: "So on Wednesday, the Treasury reported that a record $2.81 trillion was added to the deficit between October and July, which is a record breaking number, and just to give you some more info here, in July it was $63 billion that was added, and that was actually the lowest amount on a monthly basis that we saw added between October and July. Economists also point to the fact that we were bringing in a lot of tax revenue in July because Tax Day had been pushed from April 15 to July 15. So there is a chance that in August and in September, that number could creep up again. But I think one thing that's interesting to remember here is that months ago, Back in May, Fed Chair Jerome Powell notably said now is not the time to worry about the deficit, considering how significant this crisis is and the havoc it's wreaking on the labor market. And he also said that the Fed has as many tools available as they need to continue lending programs to small businesses and to consult with Congress on what they can do for unemployed workers or people looking for work. So while this is significant, it's unclear if this record-breaking number is going to have an effect on anything Congress or the White House does."

MAGARINO: "All right, Newsy's Bianca Facchinei, thank you so much."