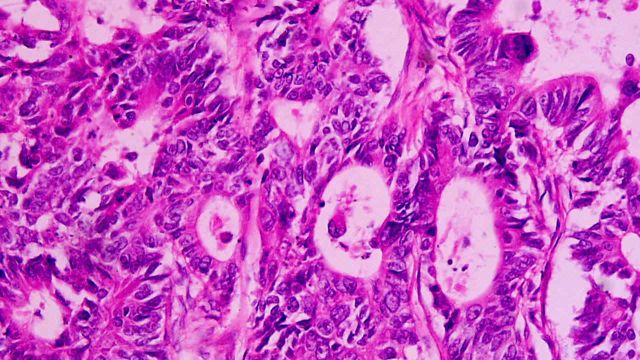 SMS
Less Invasive Liquid Biopsies May Cut Out The Need For A Scalpel
By Ethan Weston
By Ethan Weston
June 4, 2016
Diagnosing cancer might be a new use for liquid biopsies, which are usually used to monitor the disease or detect mutations.
SHOW TRANSCRIPT

Traditional cancer biopsies may become a thing of the past — at least, a new study involving liquid biopsies makes that seem possible.

A new study released at the annual meeting of the American Society of Clinical Oncology suggests that liquid biopsies are nearly as accurate as the traditional kind.

Normally biopsies require pieces of a tumor to be extracted with a needle or surgery, which can lead to complications.

For a liquid biopsy, doctors simply look for DNA fragments from tumors in a person's blood.

These types of biopsies have been around for awhile but aren't used to diagnose cancer. Instead, they're used to monitor the cancer's progress or detect mutations.

One doctor not related to the study told The New York Times that an actual physical sample still has more advantages over the blood test.

Some tumors can shed little to no DNA into the blood, making the tests ineffective. Still, the researchers say the new test is 87 percent accurate.

This video includes clips from Inside Edition, Time, MolecularMD and NBC and images from Wikimedia Commons. Music provided courtesy of APM Music.