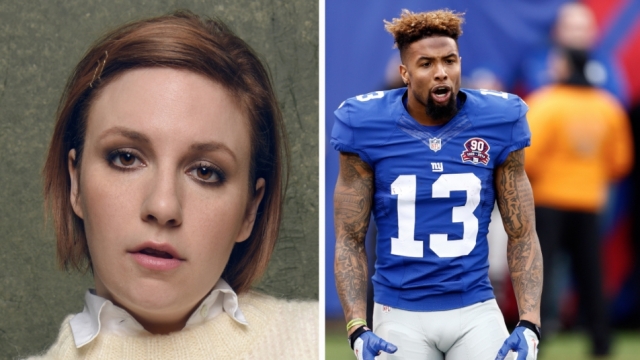 SMS
Lena Dunham Apologized For A Joke About NFL's Odell Beckham Jr.
By Samantha Crook
By Samantha Crook
September 3, 2016
She called her assumptions about Beckham "narcissistic" and apologized for presenting them as fact.
SHOW TRANSCRIPT

Lena Dunham apologized after an attempted joke about her appearance was seen as a racist insult about an NFL star.

During an interview with Amy Schumer, Dunham mentioned she felt ignored while sitting next to New York Giants player Odell Beckham Jr. at the Met Gala. Dunham said the athlete slighted her because he didn't find her attractive.

Dunham's comments were seen by some as her having racist expectations that black men should pay attention to her on her terms. And she focused on race in her Instagram apology.

In the post, she called her assumptions about what Beckham was thinking "narcissistic" and apologized for presenting them as fact.

She wrote: "I see how unfair it is to ascribe misogynistic thoughts to someone I don't know AT ALL. ... I would never intentionally contribute to a long and often violent history of the over-sexualization of black male bodies- as well as false accusations by white women towards black men."